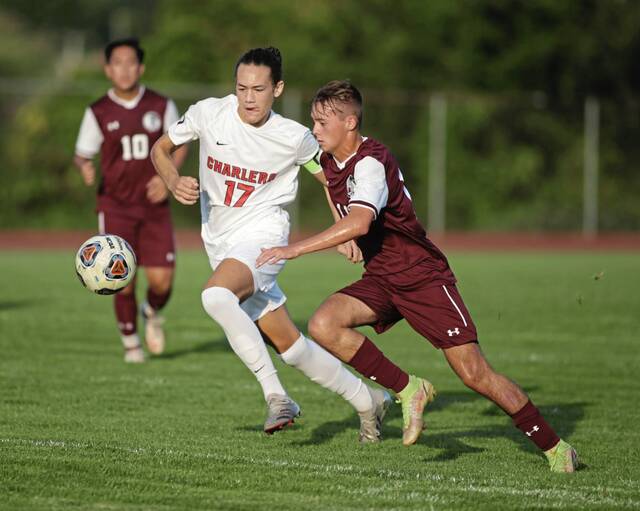 Greensburg Central Catholic boys soccer coach Rob Fabean said before the season he was going to let his players score as many goals as they wanted.

Green light all around.

Last year, he called off the dogs when a player hit three goals.

But the Centurions are letting it rip now, and their talents are showing through in the form of big numbers: Through 11 games, GCC (10-1) has scored 96 goals.

Senior Carlo Denis had 34 of them — to lead the WPIAL — and senior Kyler Miller was next with 26. Three others have at least each.

Denis had back-to-back games with six goals and tallied 16 over a four-game stretch.

GCC announced it was going to throw a high-powered offense at teams from the jump when it beat Beth-Center17-1, in the season opener.

The Centurions, ranked third in Class A behind Winchester Thurston and Sewickley Academybeat Ligonier Valley15-2, California13-2, and Beth-Center again 14-0.

“We’re not trying to embarass teams,” Fabean said. “But we need to stay on the gas. We need to be better defensively. We have been giving up some horrific goals, so we need to score more.”

Even with the restrictions last year, GCC still had 76 goals in its first 10 games and topped 10 goals six times.

GCC’s only loss this year came against Sewickley Academy4-2.

Fabean said he gives his front six players freedom to move around, which comes with a green light to shoot.

“They can go where they want,” he said. “It’s good to have that interchange.”

Penn-Trafford started 1-4 and was shut out in all four losses. But the Warriors have used a challenging nonsection schedule to keep it sharp for Section 4-3A play.

They are 5-3-1 in the section and tied with Gateway for third place after earning a 2-2 tie with the Gators on Tuesday. The top four teams make the playoffs.

Penn-Trafford lost to Class A No. 1 Winchester Thurston, 4A No. 2 Pine-Richlandrival Norwin (4A) outside of section play.

The Warriors played No. 1 Plum close in a 2-1 loss, and five of their wins are by shutout. They visit Franklin Regional Thursday.

Franklin Regional opened the season ranked No. 2 in Class 3A, but an early slide dropped the Panthers from the top five.

But chemistry and cohesion within new coach Lukas Peterson’s system is producing results, and the team moved into the No. 5 spot this week.

A couple of days later, the Panthers upset No. 1 Plum1-0.

The Panthers take a seven-game winning streak into Thursday’s home game against Penn-Traford.

They had outscored teams 39-2 during the win streak.

Plum was responsible for their last loss, on Sept. 1. But Danny Christafano scored a goal with 40 seconds left in the first half, and the defense and keeper Aryan Selokar were bulletproof in the second half to keep Plum scoreless for the first time since 2018.

“I was disciplined early on because I wanted out guys to learn what I wanted to do,” Petersen said. “It took us a little time to get everyone on the same page. But the (Plum) win was a great team effort. They all grinded it out.”

Franklin Regional will raise money for former Panthers football player Joe Purdue, who is battling brain cancer, with multiple raffles at Thursday’s home game against Penn-Trafford. … Norwin and Franklin Regional have won seven games in a row, Greensburg Central Catholic is on a six-game winning streak and Belle Vernon has won five straight.

Bill Beckner Jr. is a Tribune-Review Staff Writer. You can contact Bill by email at bbeckner@triblive.com or via Twitter .