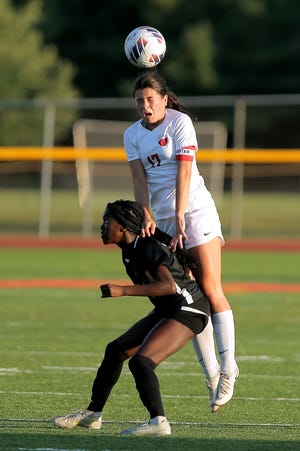 Columbus School for Girls soccer coach Genelle Castro can’t find one word to describe senior Annie Wagenbrenner. Instead, she needs a multitude of descriptors to characterize her lockdown defender.

Wagenbrenner has started since midway through her freshman season and has come to epitomize the Unicorns’ defense. CSG was 6-4 overall and 3-3 in the MSL-Ohio Division after defeating Buckeye Valley 2-0 on Sept. 28, but had surrendered only seven goals.

“You can’t describe Annie in just one word,” Castro said. “I think she’s an exuberant. I think she has this tenacity, this grit and perseverance, and she’s hilarious.

“She just has this attitude. She has so much going for her. She’ll be successful (in) whatever she’s doing, and I hope this gives her a launching point to whatever she wants to do.”

Being a defender, Wagenbrenner and her teammates in the back handle the work that depends on grit and comes with little glory. Through 10 games, she had one goal this season and three goals and two assists in her career.

“Our defensive philosophy before this year was to get everything out and look to the corners,” said Wagenbrenner, an Upper Arlington resident. “We’ve reached a point now where’re comfortable playing through our growings, and we’re strong together — defense, midfield and attack. Our defensive philosophy is to be the last people on the field and protect our goalie with everything we have.

“I think teamwork is important. It’s like a working machine back there. If one of us steps out or messes up, the other can fill in. Everybody messes up, so I feel like the most important thing is to work together, communicate, cooperate and fill in. It’s all pressuring and covering.”

CSG has just 15 players on its roster, meaning fatigue can set in during games. Wagenbrenner said it’s her role to make sure her teammates continue to give all they have, even when they start to wear down.

“For having only three or four subs, we’ve been pulling together and killing it,” she said. “We’ve had grit, friendship and encouragement. We encourage one another and we really want to play for our teammates and one another.

“That’s another boost that drives us within. When we’re really tired, you look over to your friend who’s tired and you realize that you want to power through it for her and the rest of the team.”

Castro said Wagenbrenner has an inclusive nature that benefits all of her teammates.

“Annie exhibits the leadership qualities you’re always looking for in kids,” Castro said. “She’s vocal, she leads by example, she sees the field well and she has a great soccer IQ. But she also loves every single person on the team. She’s great at reaching out to freshmen and making them feel like they’re a part of the community.

“The team chemistry this year is better than it’s been in the past few years and that’s in part to Annie and our other senior, Claudia Jones. They’re really making sure they’re doing their job as captains and leading the team on the field.”

This will be the final season of organized soccer for Wagenbrenner, who has a 3.9 GPA and wants to attend the University of Georgia for coursework in environmental studies and economic policy.

“I’d like Annie to consider a smaller school because I think she’d be a tremendous college soccer player at the appropriate level, but she has big dreams in environmental studies,” Castro said. “Even if her last soccer game is on this field, hopefully the life skills and the leadership opportunities that she’s had in this program is something she will carry with her no matter what she does.”