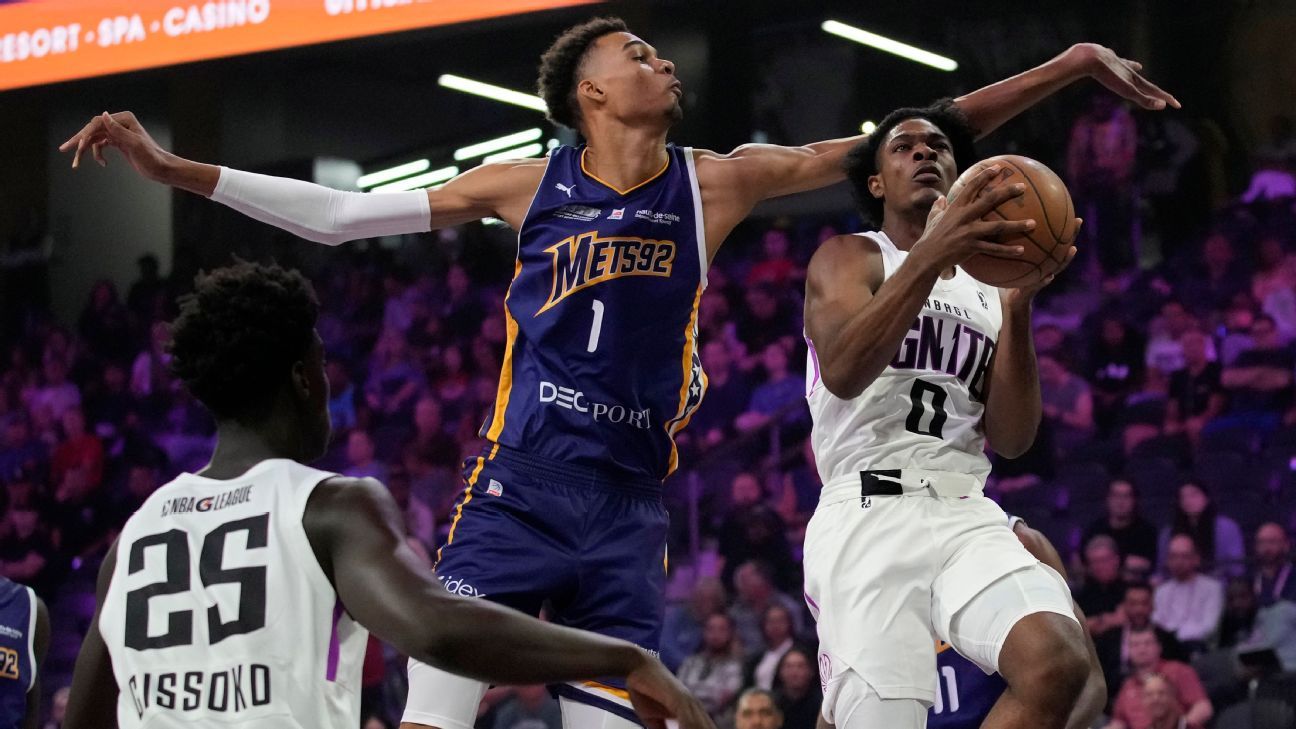 HENDERSON, Nevada — With Chris Paul and A’ja Wilson watching courtside, French basketball star Victor Wembanyama, the uncanny 7-foot-5 center and projected No. 1 NBA draft pick, put on a show in a 37-point performance Tuesday night at the Dollar Loan Center against the G League Ignite and Scoot Henderson, the projected No. 2 pick.

At halftime, Wembanyama’s Metropolitans 92 team, a pro squad from France, was down 71-52 before his second-half burst helped his team take the lead and battle the Ignite down the stretch.

“At some point, it was just about taking over because our team needed players to step up because we were down [21 points], I think,” said Wembanyama, who admitted playing longer quarters for the first time (games in Europe are 40 minutes versus 44 minutes in the NBA and G League) affected his stamina. “Coming back from such a lead, it’s a tough task. … There are times, you got to do what you got to do.”

Henderson finished 11-for-21 and led his team to the win with his own display of impressive shots, drives and dunks, including a 3-pointer and reverse layup over Wembanyama in the first half.

He said he never thought about the game as a matchup between himself and Wembanyama, though.

“It’s just playing basketball on a stage,” he said after the game. “That’s what I took away from this night.”

Tuesday night’s game was the first of two showcases between the teams this week in Henderson, about 20 minutes from the Las Vegas Strip. The teams will play again Thursday at noon.

It was Wembanyama’s first game in the United States. He finished 11-for-20 (7-for-11 on 3-pointers) with five blocks — and with a number of noteworthy players and NBA reps on hand to see him up close.

Chelsea Gray and Wilson, the Las Vegas Aces stars who have captured both a WNBA title and FIBA World Cup championship in recent weeks, sat on the baseline. Phoenix Suns stars Devin Booker and Paul and free agent DeMarcus Cousins all had front-row seats, too.

“He’s good,” Gray said about Wembanyama. “To be that big and that tall with guard skills is nice.”

Paul said he came to the game to watch the top prospects battle and because of his passion for basketball.

“I’m a big fan of the game,” Paul said. “All of these guys are trying to get to the league.”

The NBA teams hoping to get lucky in the draft lottery on May 16 were also in the building. Los Angeles Lakers general manager Rob Pelinka was one of nearly 200 NBA representatives who had been issued credentials for the game, Ignite public relations director Mara Rudolph said.

Both Wembanyama and Henderson lived up to the hype.

Wembanyama, who is gifted with a set of skills perhaps no player his size has ever possessed, began the game playing point guard on one of his team’s early possessions before spinning off a defender and double pumping on a layup off the backboard, which dazzled the crowd. After a couple of big blocks, however, his offense mostly stalled against the Ignite’s pressure.

“He was amazing,” Metropolitans 92 coach Vincent Collet said after the game. “What he can do with his size, his agility, mobility, not only his ability to shoot the 3, moving very well. He even made a couple of very good passes. I think he [had] a real good game but he also will learn from the first half. He has to fight more because he knows to expect that kind of aggressive defense.”

After halftime, Wembanyama showed off some of the other moves that made one Eastern Conference NBA scout tell ESPN “we’ve never seen anyone like him.” Wembanyama hit multiple 3-pointers that helped his team get back into the game and take the lead entering the fourth quarter, including a late block on Henderson’s layup attempt.

One thing seemed clear after Tuesday’s game, however, per conversations with some of the NBA folks who watched the game: Wembanyama might be in his own category for the 2023 NBA draft.

Asked whether he’d ever seen anyone like Wembanyama, Cousin, the former NBA All-Star, said, “Nah, man.”

“These kids are just getting rarer and rarer,” he added. “They’re growing fast. They’re bigger than ever. … I just wanted to be a fan and see it firsthand.”