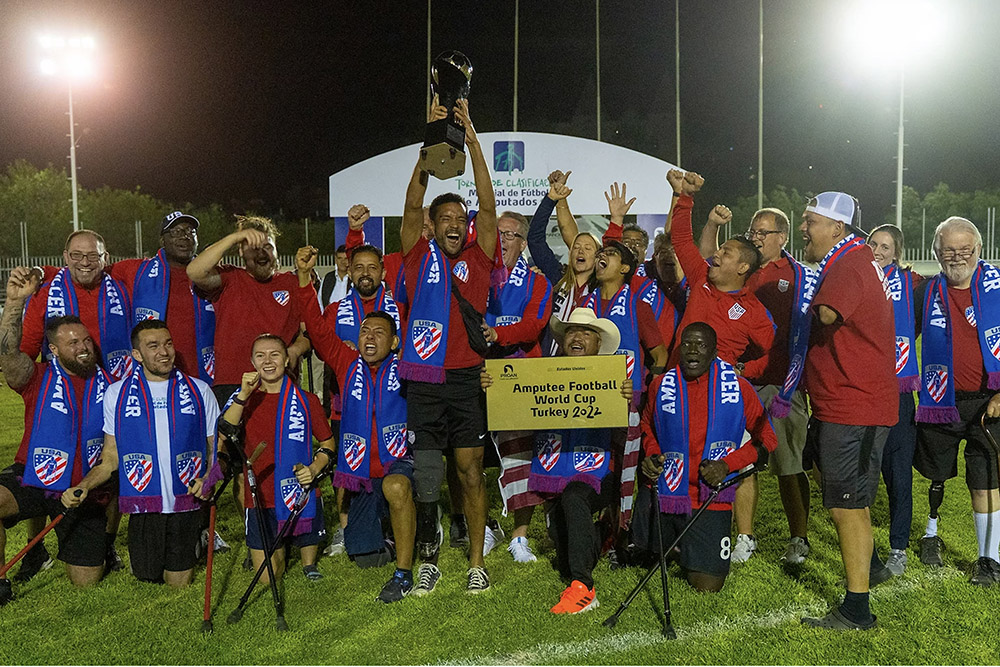 When Eric Lamberg went on a mission trip to Les Cayes, Haiti, as a physical therapist in 2012, he had no idea that he was about to discover a deep passion that would be driving him more than 10 years later.

He saw some people playing in a nearby field, and that was the first time he saw amputee soccer. Lamberg, a clinical associate professor in the Department of Physical Therapy in the Stony Brook School of Health Professionswho has played soccer since he was 5 and continues to play in adult leagues, was immediately hooked.

“When I returned home, I looked up the American Amputee Soccer Association and began to work with them,” said Lamberg.

Ten years later, as head coach of the US National Amputee Soccer Team, Lamberg is once again leading his inspirational team to the Amputee Soccer World Cup, which is currently underway in Istanbul, Turkey. The World Cup began September 30 and will continue through to the championship game on October 9.

Lamberg’s first task as part of the association was to identify potential players. In 2014 he joined the association’s board of directors and was later named head coach of the US National Amputee Soccer Team. At that point, realizing he would need some help to get to the next level, he reached out to James Pierre-Glaude, one of his former students, who had just returned to Stony Brook as a faculty member.

Pierre-Glaude, now a clinical assistant professor in the Department of Physical Therapy — who is both an athletic trainer and a physical therapist — was the perfect choice. He accompanied Lamberg to the World Cup tournament in Mexico in 2014and, like Lamberg before him, was all in.

“This was my first time working with athletes that were elite, adaptive athletes, and I didn’t treat them any differently,” he said. “They liked that and bought in to it.”

The rest is history. With Pierre-Glaude’s help, Lamberg coached the team at the 2018 Amputee World Cup, and the duo is back leading the team in Istanbul.

During the COVID-19 pandemic, when travel was difficult and often impossible, the pair shifted the focus from advancing the national team to developing regional teams, forming teams in Long Island, New England and Texas. They are currently working to develop another regional team in Southern California and to secure sponsors.

“Major League Soccer has supported us in many ways, mostly financially,” said Pierre-Glaude. “We’ve been able to align our regional teams with some major MLS clubs, including the New York Red Bulls, the New England Revolution and the Houston Dynamo.” 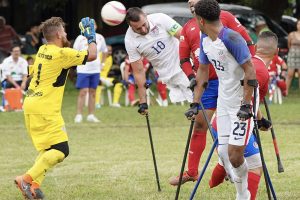 “Eric Lamberg and James Pierre-Glaude have invested their lives into this,” he said. “They are truly pioneers of this sport and have played a major role in providing us the opportunity to play a sport we love at an extremely competitive level.”

That’s something of which both Lamberg and Pierre-Glaude are acutely aware.

“I always try to remember how these changes lives,” said Lamberg. “Many people who have come to this sport have said that this team has provided them with a community and an ability to be part of a team, and in some cases, help them reset mentally by being able to play soccer again. Our win during the qualifying tournament in March was very emotional. It was the celebration of years of hard work that validated that the US team is ready to compete and take on the world.”

“We travel a lot, and whether it’s in an airport or in another country, what I see is resiliency and a sense of belonging,” said Pierre-Glaude. “Whether it was a birth defect or an accident or an illness that affected these players, they are just athletes kicking the ball around and there’s a sense of the community, that there’s a group of people ‘just like me.’ And it’s even a greater sense of that when we go to something like the World Cup, where there’s 23 other nations and hundreds of people.”

When the World Cup is over, Lamberg will get back to focusing on growing the back home sport.

“This is an exciting sport that is growing very fast,” he said. “We are always looking to provide opportunities for people living with amputation to have a place to play and making sure that people are aware of the sport and know where to find us. We are also a 501(c)3 that is self-funded and relies on sponsorships and donations. I am humbled to be part of this organization and to learn each and every day from all the athletes and staff that devote time to building this.”