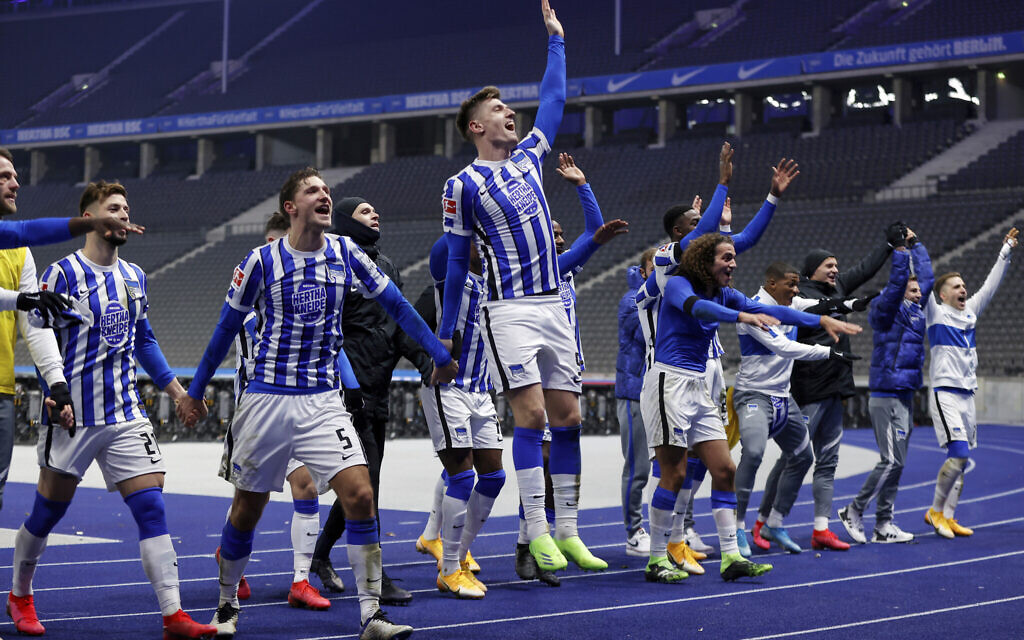 A commercial Israeli spy outfit said it helped oust the president of a Berlin soccer team, it was revealed last week, sending shockwaves through the German sports world and shining a light on the operations of a hitherto unknown intelligence firm.

On September 6, Shibumi Strategy filed suit in Tel Aviv against Lars Windhorst, majority owner of Berlin’s Hertha BSC soccer club, alleging that he had failed to pay for a successful yearlong covert influence campaign against then-team president Werner Gegenbauer that he hired the firm to conduct, according to court records seen by The Times of Israel.

The suit, which alleged that Windhorst had agreed to pay 5 million euros ($4.9 million) to Shibumi, was first reported by the Financial Times on Thursday. Hours later, the business intelligence company withdrew the lawsuit.

The Hertha club has reportedly asked a law firm to independently investigate the claims in the article.

Neither Shibumi Strategy nor Lars Windhorst replied to The Times of Israel’s request for comment. In a Facebook post on Saturday, Windhorst described the Financial Times article as “nonsense.”

to Shibumi Strategy’s now-withdrawn complaint, which is accessible to court reporters in Israel, Windhorst met with Shibumi’s CEO Ori Gur-Ari in June 2021 to solicit the company’s help in pushing Gegenbauer out. 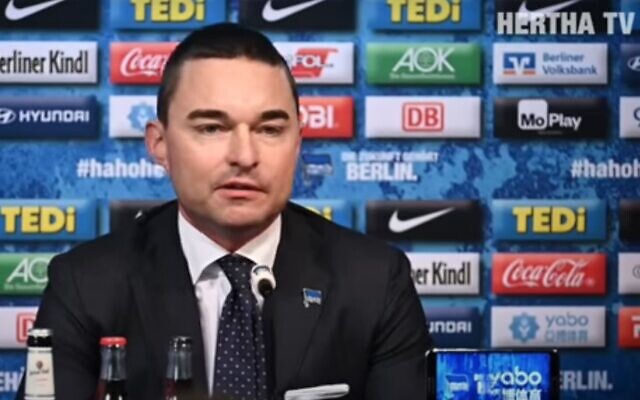 Windhorst first acquired a 49.9 percent of Hertha through his company Tennor Holding in 2019, and a year later upped his stake to 66.6%, paying a total of 374 million euros ($419 million). According to media reports, he promised to turn the notoriously lackluster team into a “big-city club” that could win matches and compete in the Champions League, Europe’s premier soccer tournament. The club is near the bottom of the Bundesliga, Germany’s top division.

According to the complaint filed in Tel Aviv District Court, Windhorst felt that Gegenbauer stood in the way of a collaborative relationship between himself and the rest of the club’s leadership. 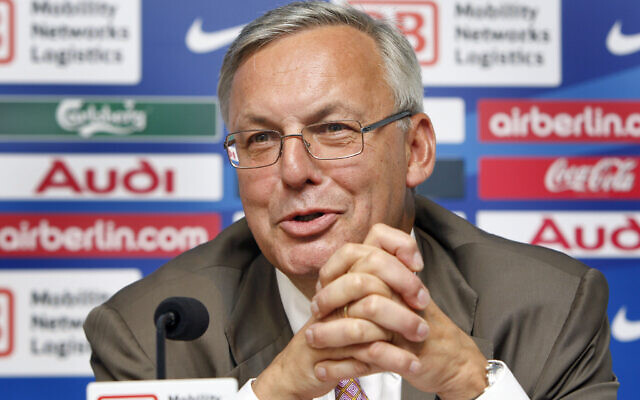 Despite the fact that Windhorst is the club’s majority shareholder, the Bundesliga’s rules, which prohibit a single investor from holding decision-making power over a club, kept him from being able to fire Gegenbauer outright, the complaint said.

Windhorst nonetheless made little secret of what he thought of the team boss, publicly attacking Gegenbauer and calling for his resignation. 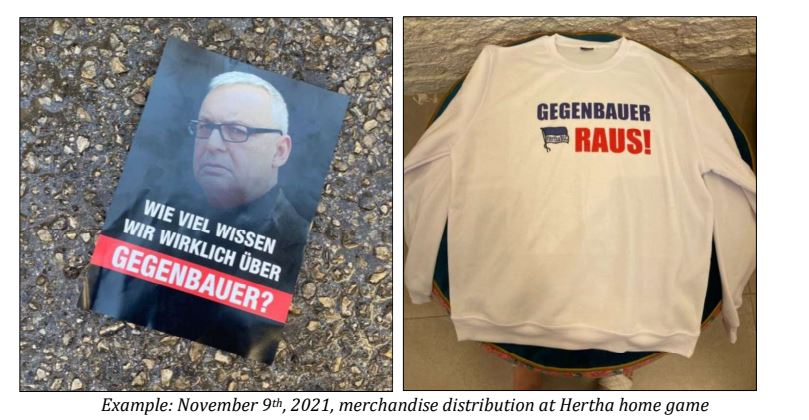 Windhorst agreed to pay Shibumi a monthly fee of 125,000 euros and a “success fee” of 4 million euros to “plan and develop a strategy” whose ultimate goal would be Gegenbauer leaving the club, according to the suit.

Shibumi Strategy said it had proceeded to carry out a year-long campaign, hiring German-speaking Israelis who approached Gegenbauer’s family, colleagues and acquaintances under false pretenses, gathering intelligence and influencing these individuals to carry out actions that would lead to Gegenbauer’s ouster.

“Throughout the entire period of the project, a team of more than twenty managers, field operatives (former agents), campaigners, OSINT analysts, web designers, content writers, and German native speakers were recruited to the project, and all worked together days and nights for twelve months,” the complaint stated.

Shibumi was founded in Tel Aviv in 2017 by Gur-Ari and Saphia Fenton, an Israeli woman who had recently left the spy-for-hire firm Black Cube, according to a lawsuit she filed against Black Cube in 2017.

The firm maintains a low profile. Neither Gur-Ari or Fenton, who owns the firm, has much of a digital footprint, while the company’s website consists of a single page with the words “Let’s discuss how we can be of service to you.” 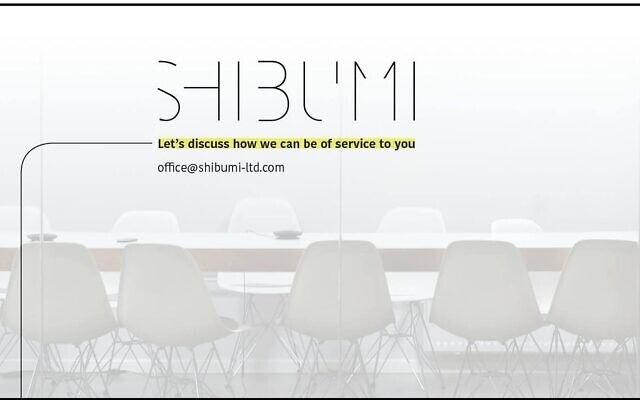 The page’s metadata, invisible on its homepage, does offer a description of what the company does: “Shibumi Strategy Ltd. is an international intelligence agency that supports and performs complex information service/intelligence activities which are personalized for wealthy individuals, law officers and companies in their most critical/precarious and sensitive situations.”

MK Ram Ben Barak (Yesh Atid), a former deputy director of the Mossad, was an adviser to the company’s board in its early stages, according to media reports. When contacted by The Times of Israel, Ben Barak said that he no longer has any relationship with the company.

“I have been a Knesset member for about three and a half years and therefore I do not advise anyone. I was in touch with the company for a few months about 4.5 years ago,” he wrote in a text message.

Many of Shibumi’s self-described tactics, as detailed in the lawsuit, are reminiscent of those used by Israeli covert influence companies like Black Cube and Psy-Groupwhich reportedly used field operatives and social media avatars, respectively, to covertly influence targets.

‘He does exactly what we want’

Shibumi’s strategy to oust Gegenbauer, president of Hertha BSC since 2008, involved sending “field operatives” to speak with members of his family, social circle and prominent fans, the firm said.

In Germany, football clubs are controlled by members’ associations of fans, who then elect a president. Shibumi boasted that in one case its operatives established such a close relationship with a particular member of the Hertha club that “in daily personal communications, the [Shibumi] team is influencing [him] according to its needs.”

According to the complaint, Shibumi also sent a WhatsApp message to Windhorst about this prominent club member, saying that “he does exactly what we want. We direct him daily.” 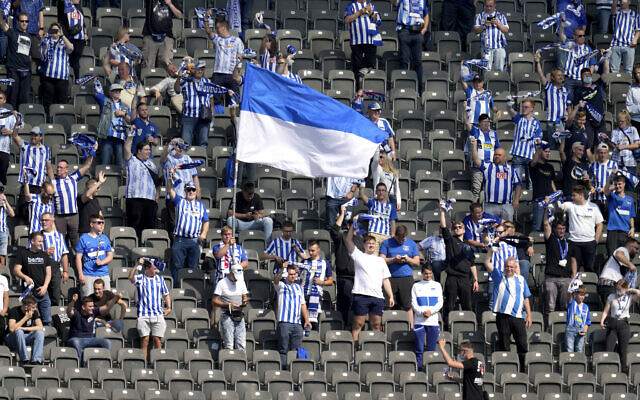 In the complaint, Shibumi Strategy claimed that in addition to using field operatives, it spread negative messages about Gegenbauer on social media and pitched negative stories about him to crime.

Shibumi created a sports blog called “Sportfreax,” it said, and even hired a caricature artist to create internet memes portraying Gegenbauer as a grim reaper, devil or cigar-chomping tycoon that were distributed on Facebook, Twitter and Instagram.

“The caricatures portray the Main Target negatively and are designed to affect his public image and reputation as part of the effort to remove the Main Target from his current position,” a document within the complaint said. 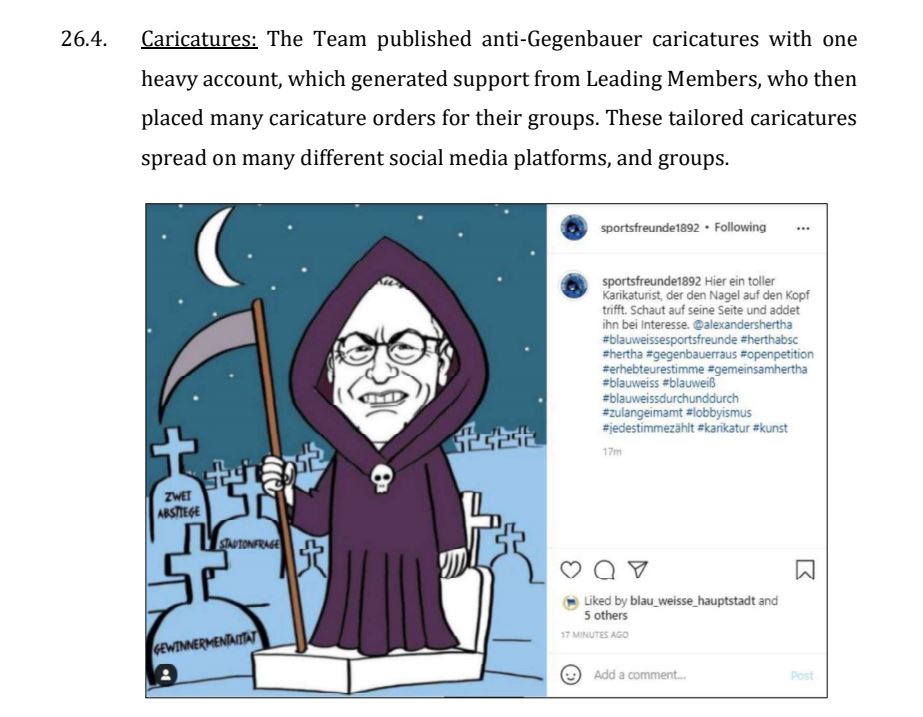 In addition, Shibumi Strategy said its operatives handed out thousands of flyers, stickers and hundreds of sweatshirts to fans at Hertha games. Many were emblazoned with the words “Gegenbauer Raus,” German for “Gegenbauer Out!”

On May 24, 2022, amid mounting criticism of his leadership, Gegenbauer resigned, citing as his reason that “I want to make a fresh start for the future of Hertha BSC.”

“The project was successfully accomplished on May 24, 2022, when the Main Target officially announced his resignation as President of Hertha BSC to the Executive Committee of the football club. Hence, the project’s objective was met,” said a progress report Shibumi sent to Windhorst that was included in the complaint. 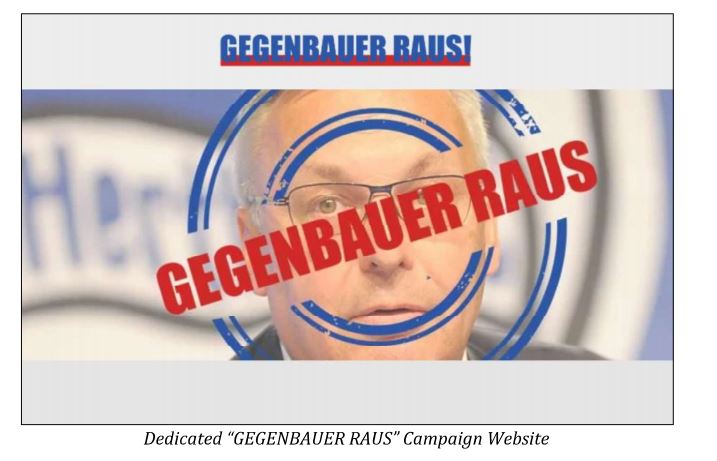 By that point, Gur-Ari had already been emailing Windhorst to complain about late payment of invoices for several months, according to the complaint.

“Dear Lars, I hope you are doing well,” read an email from April 2022. “Please note that currently there are seven invoices open for a total amount of EUR 875,000.

“I would appreciate it if you could please take care of this as our expenses for such a project are very high, and it has become hard for me to keep paying for our activities without getting paid.”

Windhorst made some initial payments, according to the complaint, but never settled up in full.

“Hi, Ori,” he reportedly wrote, “the problem is that there has been and still is a huge discrepancy between your perception on what value you bring or brought in the past and the reality of how things turned out…”

According to the complaint, on June 24, Windhorst sent Gur-Ari a message over the Signal app saying, “We have no idea and no proof if your work was substantial and had any effect on Hertha.”

“I feel deeply disrespected… we worked days and nights even though you didn’t pay the fees for 8 months. You promised me millions if Gegenbauer would leave his position unconditionally.”

The saga is only the latest to plague Windhorst, who has been sued multiple times for allegedly failing to pay his debts, including by Len Blavatnik, the controlling shareholder of Israel’s Channel 13 television station, with whom he settled for $64 million in 2017. In November, a Dutch court declared his holding company Tennor Holding BV insolvent.

The 45-year-old German entrepreneur and financier rose to fame at 16 when he dropped out of school to found a multimillion-dollar electronics company. He later filed for bankruptcy but bounced back in 2004 when he founded an investment company known as the Sapinda Group, which later changed its name to Tennor Holding BV

In 2010, he received a one-year suspended prison sentence in 2010 for embezzling about €800,000 of company money to pay offs and for his personal use debt.

Windhorst has a reputation for lavish living, flying in a private plane, and hosting business associates aboard his yacht.

I was honored to receive His Serene Highness Prince Albert of Monaco on board of award winning #superacht Artefact which was built by Tennor group company #Nobiskrug. We had a great discussion about the latest innovations and green technology implemented on #Artefact. pic.twitter.com/dwxv9FNrXs

Despite Windhorst’s promises to turn Hertha around, the club has continued to struggle, and currently sits at 14th place in the 18-team Bundesliga, a year after it narrowly avoided relegation.