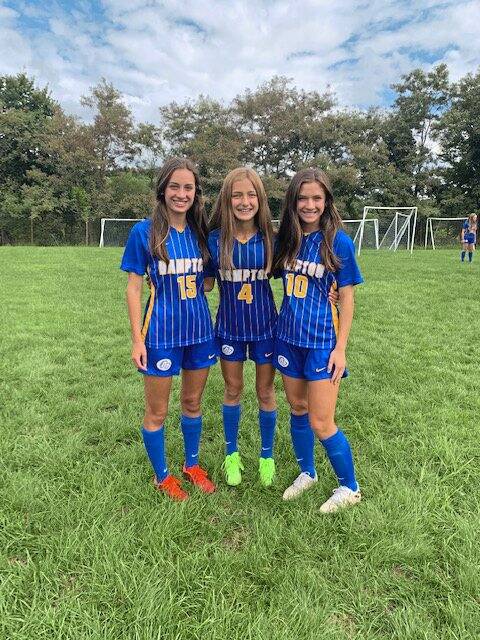 Hampton girls soccer coach Bill Paholich learned early this season he needed to be on a first-name basis with his players.

If he wasn’t, chaos broke out.

“It’s crazy,” Paholich said. “You can’t really call anybody by their last name anymore. You say, ‘Zebrine,’ and you got three of them saying, ‘What?’ “

The Hampton soccer programs — boys and girls — are home to an unusually high number of siblings this season.

The girls program features four sets of sisters, including a trio of Zebrines, and the boys program has three sets of brothers. On top of that, there are another four girls players who have brothers in the boys program, including sophomore Sara Kenst and her twin brother, Danny.

Longtime Hampton athletic director Bill Cardone said it is common to have a few siblings in the soccer programs, but this season includes an inordinate amount.

“We’ve always had a couple,” Cardone said, “but not this many.”

Paholich agrees. He has been a coach in the girls program for 23 years, including the past 10 as head coach.

“We haven’t had this many in a long time,” he said.

The Zebrine sisters, sophomore twins Maria and Sophia and freshman Olivia, are part of a Talbots program that won seven in a row after an early season loss to Mars. The Talbots were 5-2 in Section 1-3A (8-2 overall) after a loss in a Sept. 26 rematch with top-ranked Mars.

“It’s so fun,” Maria Zebrine said. “I love every moment with them. It makes our bond as siblings stronger.”

Sara Kenst, who scored three goals in a 6-2 win over Knoch on Sept. 6, said it is comforting to have a sibling playing the same sport. They can relate to each other’s successes and struggles.

“He’s always been my biggest motivator and competitor,” Sara Kenst said. “We help each other out. He has his bad games, and I have to be the sister supporting him, and he does the same for me.”

The family atmosphere isn’t just about siblings. Matt McAwley is the head coach and his father, Jonathan, is an assistant for the defending PIAA Class 3A champion boys team, which were 5-2 in Section 1-3A (7-3 overall) as of Sept. 26.

For many of the siblings, this is the first season they are on the same team and attending the same practices. In youth soccer, they would have been separated by age groups.

“This is the first time in my life that I’ve been on the same team as him,” senior goalie Marco Sciulli said of his freshman brother, Matteo. “It’s been pretty cool and exciting.

“Whenever we get back home, we talk about the practice and the game and boost each other up. … We try to bring each other up and help each other get better.”

Having siblings on the same roster can include different dynamics for the coaches. Sometimes, the younger sibling is more talented and earns more playing time. Or one of the siblings fails to make the team.

“Unfortunately, in the past, I’ve had to cut one of the sisters before,” Paholich said. “It’s tough. It is a tough environment. There’s been years where I’ve had a younger sibling play over top of an older sibling. It makes for some awkward situations, but as long as the family is close, they usually understand.”

For sure, there is typically competition among siblings. But senior Skye Bierker, whose freshman brother Landen is part of the boys program, said the competitiveness stays friendly.

“Of course, there is a little rivalry,” Skye Bierker said. “But it’s all in good fun.”

All in the family

There are 11 sets of siblings, including two twins, within the Hampton boys and girls soccer programs