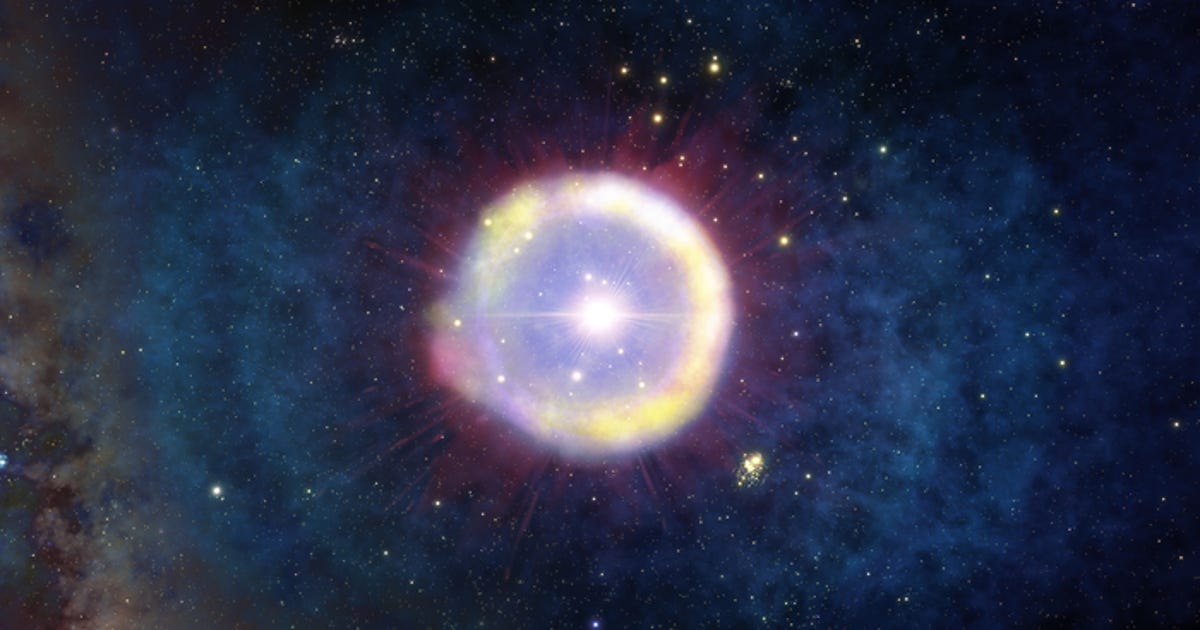 Population III stars have never been seen by humanity, but they could be key for understanding the timeline of human existence.

Some 13.8 billion years ago, thanks to a furious explosion, the universe’s clock began to tick. But for a long time, the realm we now call home would lie vacant, shrouded in darkness. It’d take about 100 million years for the very first stars to bloom, and when they did, they expanded into gleaming monsters unlike anything we witness today.

Experts believe these stellar ancestors were so utterly colossal that if they were still around, they’d make the sun look like a weak yellow pom-pom. (And, I mean, our host star is a plasma ocean large enough to fit 1.3 million Earths inside.) Moreover, when these extreme bodies died, their supernovas would’ve been to standard star detonations what nuclear bombs are to New Year’s Eve fireworks. Menacing. All consuming.

In a way, early universe stars sound sort of mythical — and for years, they may as well have been. Scientists keep searching for direct evidence of the sparkly behemoths, to no avail. Even NASA’s trailblazing James Webb Space Telescope will have significant barriers to finding them, despite being built for the job. They’re simply too faint.

Which brings us to the present.

On Wednesday, a group of stellar archaeologists might’ve hit the jackpot. According to the team’s new paper, published in the Astrophysical Journal, we may finally have clear proof of what’re known as Population III stars, aka the massive orbs that presented the universe with its first, electrifying starlight.

In the grand scheme of things, not only might this discovery offer us a peek into the cosmic dawn, but it could also help us weave a timeline of human existence. We know we’re made of stardust, in essence, but how did stardust make us?

Investigating among the stars

To locate proof of such early stellar bodies, the research team tapped into the lens of a mighty ground-based telescope: the 8.1-meter Gemini North telescope in Hawaii. Basically, they used the powerful instrument’s data to collect clues from yet another extreme marvel of the cosmos: a quasar born just 700 million years post-Big Bang.

In a nutshell, quasars are gigantic jets of light, often brighter than our entire galaxy, which sit in the center of gargantuan black holes. Those black holes are the wheels that keep them turning.

But that quasar, in particular, was the primary object of interest because the team reasoned that, naturally, the best spot to look for remnants of an ancient star would be around a somewhat equally ancient object — otherwise known as a high redshift object. And sure enough, around the quasar, the team stumbled on something unusual.

There they saw a sort of cloud around the luminous stream, exhibiting chemical debris with an unexpected composition. It was clearly star rubble, the team concluded, but with over 10 times more iron than magnesium content than what you’d expect from a sunlike star.

After some consideration, they realized what they were viewing. This chemical fingerprint could only be connected to an epic supernova — that of a Population III star.

More specifically, the team says, that debris would’ve likely been generated as an early universe star died in what’s known as a pair-instability supernova, an explosion so unbelievably intense it’d force every single atom of the star to disperse into space. Potentially, those atoms would seed the universe with elements essential for life as we know it. Elements like hydrogen and helium.

“It was obvious to me that the supernova candidate for this would be a pair-instability supernova of a Population III star, in which the entire star explodes without leaving any remnant behind,” Yuzuru Yoshii, an astronomer at the University of Tokyo and co-author of the study, said in a statement. “I was delighted and somewhat surprised to find that a pair-instability supernova of a star with a mass about 300 times that of the sun provides a ratio of magnesium to iron that agrees with the low value we derived for the quasar.”

Prior to this paper, Yoshii said, the closest we’ve gotten to identifying a highly massive Population III star was in 2014 — but the astronomer maintains that this latest quasar-borne proof is a much clearer signature.

“We now know what to look for; we have a pathway,” Timothy Beers, astronomer at the University of Notre Dame and co-author of the paper, said in a statement. “If this happened locally in the very early universe, which it should have done, then we would expect to find evidence for it.”

The study authors write, “we predict that stars with very low [Mg/Fe] at all metallicities are hidden in the galaxy, and they will be efficiently discovered by ongoing new-generation photometric surveys.”

Perhaps the key to decoding a timeline of life as we know it lies much closer than we think — even in our own galactic backyard.