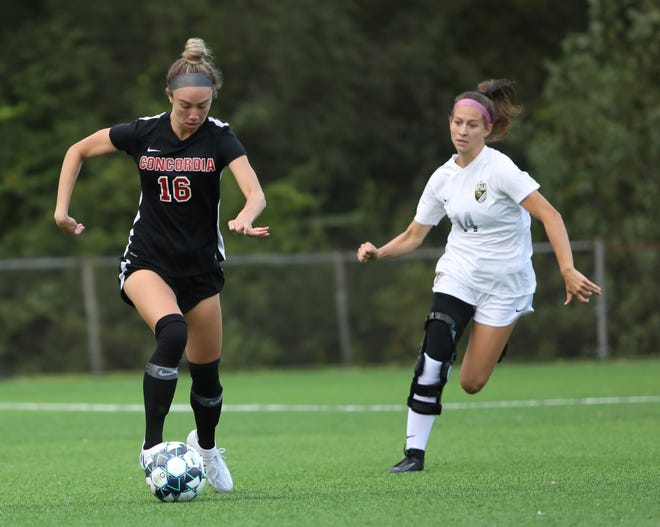 ANN ARBOR – Sam Putnam has made a reputation of being an energetic leader on the soccer field.

It started at Zeeland East, leading the Chix to their first regional final appearance, and has continued at Concordia University.

Putnam brings the musical energy in practice, with a hype playlist, and keeps the energy going on the field. It is such an impactful legacy that she is known to her team as “DJ Put.”

“DJ Put. I have always brought the music and the energy. It started sophomore year with my other coach. It just carried on. My new coach loves it,” Putnam said. “I am a mood booster and energy bringer. To be in that role completely as a senior is really fun.”

She had that as a senior with the Chix.

“She has a love and passion for the game and for her teammates that is contagious,” Zeeland East coach Joe Grit said.

Putnam came to Concordia four years ago and had her older sister Olyvia on the team. She was a senior leader and that immediately rubbed off on DJ Put, who was just months removed from leading the Chix.

“I came win with my sister here. That was helpful for me not to be a nervous freshman. But I have always had a natural leader role and a voice,” Putnam said. “My coach noticed that and had talked to me about reaching out to the freshmen and connecting with them. My goal this year was to make our team be a friendship. I wanted us to hang out outside of soccer more and we have done more of that this year.”

They have done so on the field, too, led by who else but DJ Put.

Putnam has changed positions this year and been playing more in the back row of defense instead of her previous midfield role.

“It is very different. You see more of the field. I miss being in the action a lot of the time, but we get a lot of action back there, too.

Defensively, from the midfield to the outside, shifting and learning a new role has been tough. But I like it. I like learning,” she said. “It has made my role more of a leader because I have to communicate a lot from back there.”

She plays mostly in the back row now, but also moves around throughout the game.

“The biggest challenge for me is going from the outside to the middle or the middle to the outside becaue the speed is different. It is about getting in a zone in each position,” she said. “Once I am in it, I am good. And I think that is why they do that so much, because I can adjust quickly.”

That ability to adjust has helped Putnam improve over the course of her career as a college starter.

“My technical skills have gotten better. I have gained a lot more confidence in my play, which has been very helpful. It took me a bit with new speed and new team to get there. Speed ​​and intensity wise, just getting better and increasing it,” she said.

It is all building toward a strong finish to Putnam’s career.

But DJ Put will still be a leader for her teams. She remains in contact with her historic Zeeland East team. Several players have been college players around the state and country from that team.

“It has been super fun. Keeping updates on other schools, it has been fun to see what they were accomplishing. Seeing them achieve everything I knew they could. I get to play against Hope Steenwyk every year and I keep up with the Zeeland kids at Davenport,” she said. “I still try to keep updates with Zeeland East and how they were doing. I didn’t realize how much the legacy has continud there. We had a lot of special girls on that team.”

Soon, DJ Put will be bringing the energy to kids who need it in her future job.

“I am a family life major with a child life minor,” she said. “I am studying to become a child life specialist. Working in a hospital with children and families to cope with their experience in the hospital. It can be a really scary place for children and my job is to help.”

If anyone can bring the kids a positive energy, it is DJ Put, and her legacy will continue long after she steps off the soccer field for the final time.