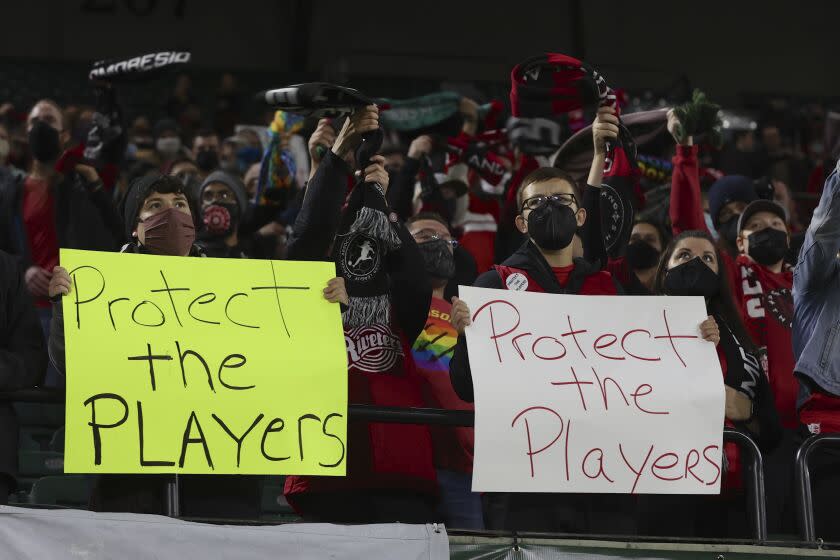 Players at the top levels of women’s professional soccer in the US were subjected to pervasive, systemic and widespread sexual abuse and harassment, and the NWSL and US Soccer did little to stop it, a yearlong report conducted by the former acting Atty. Gen. Sally Q. Yates and the law firm King & Spalding has concluded.

Yates’ report, released Monday by US Soccer, found some of the top coaches in the sport were subjects of multiple charges of sexual misconduct yet repeatedly escaped punishment. These same coaches, Yates said, employed vicious coaching tactics, including “relentless, degrading tirades; manipulation that was about power, not improving performance; and retaliation against those who attempted to come forward.”

The federation commissioned the study last fall after multiple players told the Athletic they had experienced abuse, including sexual harassment, inappropriate conduct and homophobic comments. The Washington Post reported similar charges and the resulting fallout forced the resignation or removal of Commissioner Lisa Bairdgeneral counsel Lisa Levine and, eventually, five of the league’s 10 coaches.

“Our investigation has revealed a league in which abuse and misconduct — verbal and emotional abuse and sexual misconduct — had become systemic, spanning multiple teams, coaches, and victims,” the report said.

The 319-page report documents multiple and specific incidents of coach misbehavior that was so commonplace it was something of an “open secret.” The report also makes extensive recommendations to both NWSL and USSF to address some of the issues, including increased transparency in disclosing misconduct, modifications to the federation’s coach licensing system and hiring multiple player safety officers at both the federation and league level.

“Teams, the league, and the federation not only repeatedly failed to respond appropriately when confronted with player reports and evidence of abuse, they also failed to institute basic measures to prevent and address it, even as some leaders privately acknowledged the need for workplace protections ,” the report said.

The abuse was not confined to the 10-year-old league.

“Abuse in the NWSL is rooted in a deeper culture in women’s soccer,” the report said “beginning in youth leagues, that normalizes verbally abusive coaching and blurs boundaries between coaches and players.”

In an executive summary, the report concluded multiple players informed teams, the league and US Soccer about misconduct but those reports were ignored.

During an interview with investigators, Holly acknowledged a past sexual relationship with another NWSL player and admitted to texting sexual photos to Simon, but he denied that any sexual conduct continued at Racing Louisville.

The report also focused on claims of sexual misconduct and verbal abuse by Paul Riley, who coached youth teams before leading the Portland Thorns and North Carolina Courage, and Rory Dames, who coached the Chicago Red Stars. The report did not include responses from Riley or Dames.

US Soccer President Cindy Parlow Cone, a World Cup winner with the women’s national team, announced the reforms in the wake of the report. The federation, she said, will immediately an office of participant safety, publish soccer-related records from SafeSport’s centralized database of officials and coaches who have been investigated or sanctioned for misconduct and mandate a uniform minimum standard for background checks for all US Soccer members . The federation will also create a participant safety task force “led by athletes themselves.”

“I am heartbroken by the contents of the report, which make clear that systemic changes are needed at every level of our game,” Parlow Cone said in a release. “The abuse described in the report is entirely inexcusable and has no place in soccer, on or off the field. I am squarely focused on the changes we will make to address the report’s findings and make soccer safer for everyone.

“The gravity of these issues requires us to not simply ‘turn the page.’ We can and must use this moment as a forcing function for forward progress.”

The harassment was so widespread, Parlow Cone was a target when she coached the Portland Thorns in 2013.

She told investigators that Mike Golub, the Thorns’ president of business, asked her, “What’s on your bucket list besides sleeping with me?” She recalled telling Golub to never to speak to her like that again and reported he did not.

“Several months later, when she was leaving the Thorns, she reported the incident to Thorns’ owner Merritt Paulson, who told her he wished she had told him about the remark at the time it happened,” the report read.

The Thorns told investigators “the concerns were addressed with Golub at the time.”

Jessica Berman, the current NWSL commissioner who has previously insisted transparency would be needed to trust with players, also welcomed the report and its recommendations.

“We greatly appreciate our players, staff and stakeholders’ cooperation with both investigations, especially during the ongoing season,” she wrote in a release. “We recognize the anxiety and mental strain that these pending investigations have caused and the trauma that many — including players and staff — are having to relive. We continue to admire their courage in coming forward to share their stories and influence all the changes necessary to keep moving our league forward.

“We know that we must learn from and take responsibility for the painful lessons of the past in order to move the league into a better future. The findings and recommendations … will be critical to informing and implementing systemic reform and ensuring that the NWSL is a league where players are supported, on and off the pitch, with safe and professional environments to train and compete.”

Yates’ report was based on interviews with more than 200 people, including more than 100 players, plus coaches, owners and front office staff from 11 current and former teams.

While US Soccer leadership and players have pushed for change, the report noted some NWSL teams did not fully cooperate with the investigation.

“The Portland Thorns interfered with our access to relevant witnesses and raised specious legal arguments in an attempt to impede our use of relevant documents,” the report read. “Racing Louisville FC refused to produce documents concerning Christy Holly and would not permit witnesses [even former employees] to answer relevant questions regarding Holly’s tenure, citing nondisclosure and nondisparagement agreements it signed with Holly. The Chicago Red Stars unnecessarily delayed the production of relevant documents over the course of nearly nine months.”