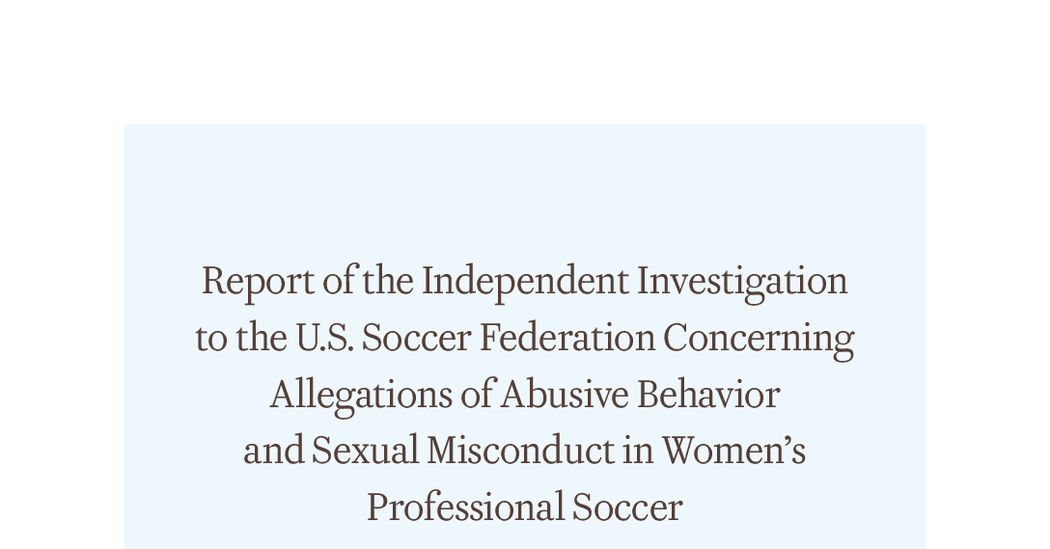 consideration as head coach of the National Team. Lydia Wahlke, Chief Legal Officer of the Federation, was told that Riley had a “relationship with a Portland player” and “cannot be the new WNT coach.” Following at least fourteen conversations among eleven people at the Federation, the League, the Portland Thorns, and the NC Courage, Riley publicly withdrew himself from consideration. But during those conversations, Wahlke never conveyed the report that Riley had a “relationship with a Portland player” to the League, others at the Federation, or the Courage. succession. The League largely ignored the complaints, and instead, weeks before the publication of The Athletic article, NWSL Commissioner Lisa Baird was actively trying to keep Riley from resigning over his anger about the post-season schedule. Founding until his resignation on November 21, 2021. During Dames’s first few years with the team, he was an unpaid volunteer. The team never performed a background check and did not undertake any due diligence prior to his hire, relying instead on the reputation of his youth club, the Eclipse Select Soccer Club. against the young girls who played for him. Former players recalled him screaming and calling them “cunts,” “fat ass,” “pussy,” “retarded,” and “bitches.” Separately, former Eclipse players informed us that Dames’s sexualized team environment—in which he spoke to players about foreplay, oral sex, and their sex lives—crossed the line to sexual relationships in multiple cases, though those relationships may have begun after the age of consent. A former Eclipse player recalls Dames “ask[ed] for massages, things like that.” Natalie Ramello, who also played for Eclipse, In the spring of 2021, the NWSL received a series of four complaints about Riley in quick Rory Dames coached for the Chicago Red Stars (“CRS” or “Red Stars”) from the League’s As successful as his youth soccer club was, Dames was equally renowned for his tirades Rory Dames21 -9-