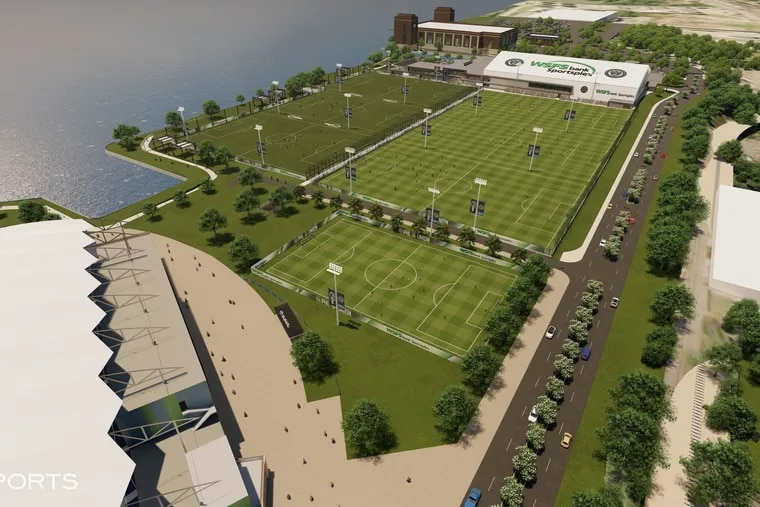 The Union have unveiled a development plan for land next to Subaru Park that will move the team’s youth academy from Wayne to Chester, bringing the full organization to one campus after nearly a decade split in two.

The move will come with the construction of a $55 million sports complex that will span 32 acres from the stadium to the former Delaware County Electric Company power plant that’s now an office building. The Union’s business staff and other firms have space there.

“This best-in-class facility will provide a singular home for our professional and academy teams while creating a premier destination for local youth groups to fall in love with sports,” Union principal owner Jay Sugarman said in a statement. “Alongside Subaru Park, WSFS Bank Sportsplex will become another centerpiece of our club and community strategy, and I could not be more proud to see this project come to fruition.”

The Union’s academy has been based in Wayne since it opened in 2013. Facilities there include a full-time high school for elite soccer prospects along with the soccer complex at YSC Sports next door.

Building such a facility has long been a dream of Union president Tim McDermott. He first raised it to fans four years ago this monthtalking about how it could be a revenue generator from local recreational sports leagues that would rent out the place.

“About four years ago, the Philadelphia Union, Delaware County, city of Chester set out for the creation of a Chester Waterfront master plan,” McDermott said at a press conference on Tuesday. “The idea was to create a vision for what Chester could be. … A plan that would show the economic impact, the economic opportunities, and the way we could do something positive in the community.”

The complex will be a moneymaker in another way, too, with a corporate sponsorship from WSFS Bank. WSFS is already a major Union sponsor, and this is part of the deal. The Union said the bank “will donate 365 hours of field and facility usage to community organizations,” per year.

» READ MORE: Brenden Aaronson has risen from the Union’s academy to global stardom

“Myself and many others were a part of the conversation back in maybe 2018 or 2019 when we started the economic development,” said Chester councilman William Morgan. “With that we engaged the community a lot. We probably had five or six meetings with the community to see what they would think or consider to be here on the waterfront.”

When the community offered its feedback, it mentioned the additions of retail stores, hotels and restaurants, which most were applied back into the master plan, according to Morgan.

“This is something that will most certainly be a resource to our community,” Morgan said. “To the Chester high students, to all the youth in the city of Chester and Delaware County.

Groundbreaking is planned for the winter. The outdoor fields are expected to be in place by next August, and the indoor facility is expected to open in June 2024.

“This project shows the continued commitment and partnership that the city shares with the Philadelphia Union,” Chester mayor Mayor Thaddeus Kirkland said. “It will create better jobs, more recreational opportunities, and a bridge that connects our community to our beautiful waterfront.”

All of the construction will be done on land between Seaport Drive and the river. That land is currently occupied by parking lots B and C, the latter of which is home to the Sons of Ben supporters club’s pregame tailgate parties.

A Union spokesperson said the Sons of Ben will get a new home for their tailgates. But what happens to parking for the rest of the public is unclear. The spokesperson said “there are plans in progress to acquire more space for parking lots” but gave no further details.

There have been some significant traffic crunches getting out of the Subaru Park complex after games this year. Public transit access to the stadium is as cumbersome as it has always been: The team runs a free shuttle to and from SEPTA’s Chester Transportation Center, but the regional rail line that stops there has long been infrequent at night.