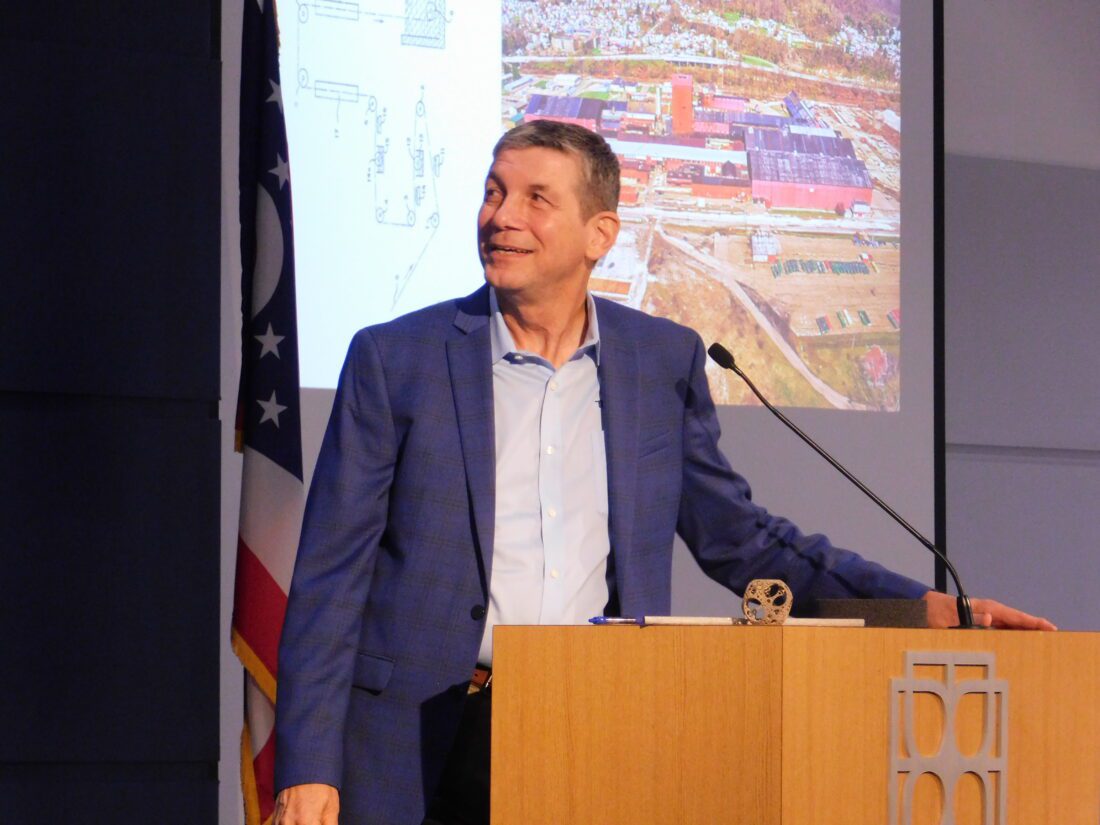 T-L Photo/ROBERT A. DEFRANK
Brian Joseph, president and CEO of Touchstone Research Laboratory, speaks at the St. Clairsville Area Chamber of Commerce’s annual dinner and awards celebration Wednesday. He described how new technologies build on each other and create more businesses.

ST. CLAIRSVILLE — A bright future was the topic visited by St. Clairsville Area Chamber of Commerce members during the annual dinner and awards event Wednesday evening.

Dowler Hall was packed at Belmont College, and the speaker was a man of ideas who dreamed of touching the stars and has the vision and ingenuity to make it happen.

Chamber Director Wendy Anderson said the COVID-19 pandemic 2020 may have been the “outbreak” year, but 2022 is shaping up to be the “breakout” year.

“Everybody wants to break out of the slump and businesses are doing better this year,” Anderson said, pointing out the chamber hosted 188 registered guests for the event. “There’s a lot of business leaders here.”

There are 500 business members and professionals in the chamber.

The award for Safety Professional of the Year went to MPR Transloading Supply Chain Solutions for efforts to promote workplace safety and health, including extensive training and investing in lifting equipment to reduce risks around barges. President Natalie Brown accepted the award.

A representative of Belco Works presented the Distinguished Employer award to the Ohio Valley Mall and Riesbeck’s Food Market, saying both companies have made strides in offering employment opportunities to people with disabilities — an underemployed segment of the population. Mall Foreman Jennifer Staley and Peter Riesbeck, director of corporate programs, accepted the awards. They commended their employees and encouraged other businesses to work with Belco Works.

The award for Community Improvement of the Year went to Giacinta’s Gelato & Caffè. Owner Audrey Brahler said her business was welcomed and that she looks forward to serving the area for many years to come.

Kirke Porterfield of Kirke’s Homemade Ice Cream and Brian Thomas of Thomas Auto Chrysler, Dodge, Jeep and Ram dealer received the Service Above Self award. Their assistance during the St. Clairsville Christmas Parade and other events and activities was noted. Thomas was unable to attend. Porterfield thanked the chamber.

Sarah Barickman was named Ambassador of the Year.

The Business of the Year award was a tie between Belmont Savings Bank and Chick-fil-A. WVU Medicine Wheeling Hospital sponsored the award. Director Joe Slavik of the Howard Long Wellness Center said the competition among exceptional businesses was fierce.

Stacy Austin, owner/operator of Chick-fil-A, said the cooperation and encouragement of the chamber was one of the reasons for the company deciding to open a restaurant at the Ohio Valley Mall in 2020.

Todd Cover, president of Belmont Savings Bank, said the bank is committed to improving the area and aiding the chamber and other organizations.

The keynote speaker was Brian Joseph, president and CEO of Touchstone Research Laboratory in Triadelphia. An innovator and inventor, Joseph said he is passionate in developing new technologies and in the businesses that have arisen from new inventions. He began his talk with a look back at technological developments such as new ways of making steel and blowing glass with machines, pointing out that while the companies that initially used them rose and fell, the technology remains and was built upon and is now used in such things as automatic bottle manufacturing and food packing.

“That’s what inventions do, and that’s what we do. We like to invent things and then spin businesses out of them,” he said.

He spoke of some of the developments at Touchstone, such as windows for space capsules and work related to commercial launches into space.

Joseph said in the future, the world can expect movement to cities. He said the greatest need the nations of the world will face is the need for more people, and engineering schools and a high population of engineers will be a draw for investors.

He said the number of buildings in the world could double, and the best and cleanest building material for these buildings will be hydrocarbon. His company has developed CFOAM, a lightweight, coal-based product that can be used for construction.

“Sometimes it’s hard to identify when the biggest opportunities are right in your yard,” he said.

Other possibilities include setting up solar sails in space to collect energy.

Joseph said there is more potential for the future, including stronger forms of aluminum, resistant to fatigue, which can provide thermal protection for the exteriors of rockets. He said Touchstone is also making stronger chrome and copper alloys.

“The uses will be infinite,” he said. “I think we can build a manufacturing plant within 20 miles of our facility in about 20 months. That’s the plan.”

“There’s so much going on in this area that people don’t know about,” Belmont College Energy Institute Manager Ed Mowrer said. “Dr. Joseph is just a pioneer in a lot of these businesses. … It’s important to know how the Ohio Valley’s contributing to all of these businesses like aerospace and space and different manufacturing. … He’s hired a lot of our graduates over the years.”

“To know that that innovation is here locally is just incredible,” Slavik said. “It’s a pearl that we don’t know.”

“We want people to be excited about the future, and he is part of the future,” Anderson said.


Today’s breaking news and more in your inbox