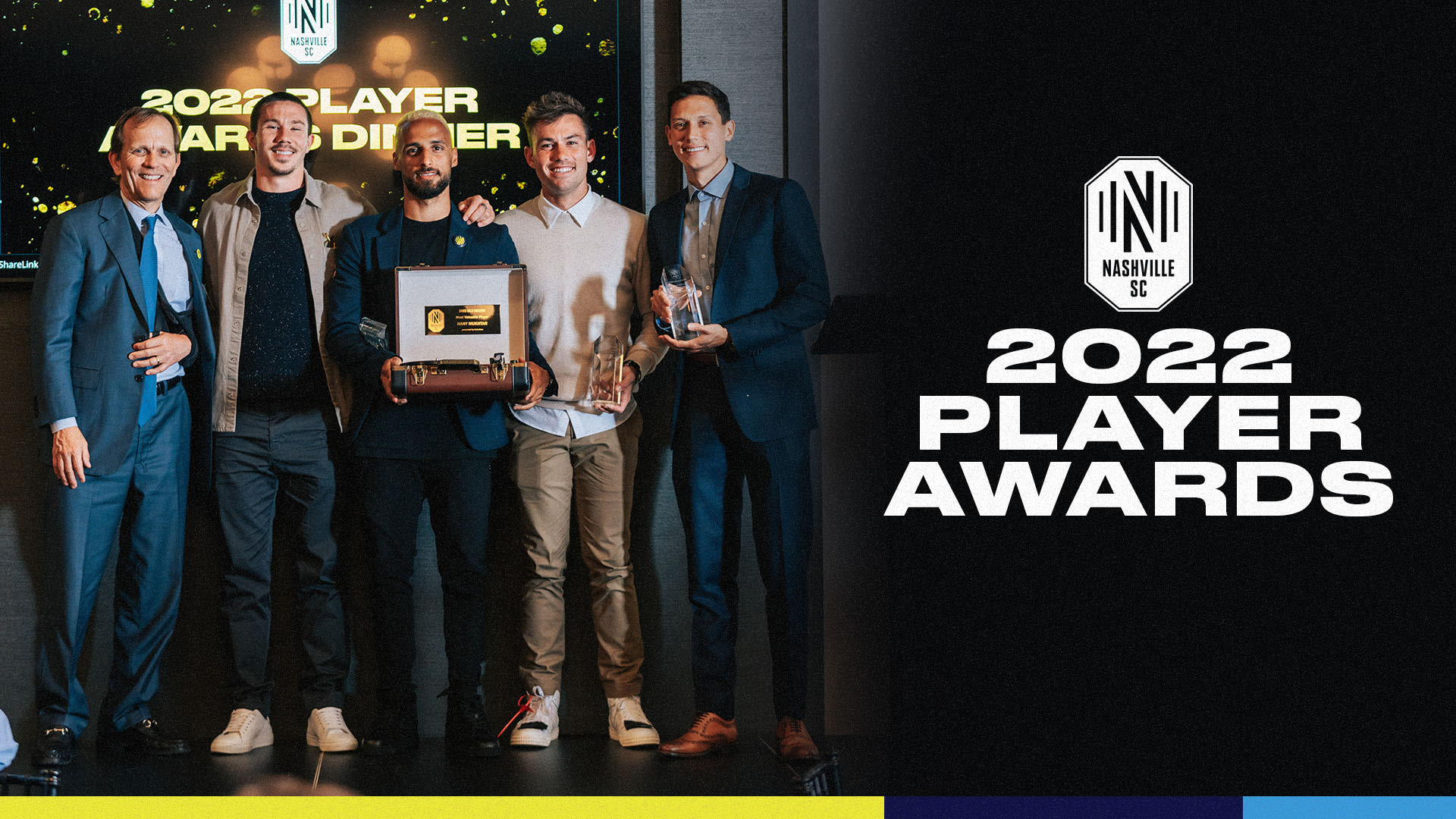 Newcomer of the Year: Sean Davis

Goal of the Year: Alex Muyl vs. CF Montréal (May 18 at GEODIS Park)

Humanitarian of the Year: Taylor Washington

Landon Donovan MLS MVP frontrunner Hany Mukhtar has been nothing short of sensational in his third MLS season. The German attacker is the MLS Golden Boot leader with 23 goals and 34 goal contributions. At the league and club levels, Mukhtar became the first player this season to record double-digit goals and assists, as he earned recognitions and accolades along the way by representing club in the 2022 MLS All-Star Game, presented by Target, and winning the 2022 MLS Skills Challenge competition for the MLS team against LIGA MX All Stars. Additionally, Mukhtar was selected at the league’s Player of the Month for the month of August and named MLS Player of the Week three times, including back-to-back weeks on Sept. 1 and 6. Historically with the club, Mukhtar has been involved in over half of Nashville SC’s regular season goals (70 of 129) and is the all-time leader in goals (43) and assists (27).

Hany Mukhtar has served as the offensive catalyst for Nashville SC in 2022, leading the team in eight separate offensive categories, including goals scored (23) and assists (11). As of Sept. 29, Mukhtar has contributed to a goal in eight consecutive matches (11 goals and three assists) and to at least one goal in 17 of his last 20 MLS regular season appearances.

Reigning back-to-back MLS Defender of the Year Walker Zimmerman has been a mainstay for the Nashville SC backline setting a new career-high in matches played (28) for the Boys in Gold this season. The second-ever American centerback to become a Designated Player is expected to set a new career-high in matches started, currently with 26, as he leads the club in accurate passes (1,149), touches (1,688), clearances (118), headed clearances (72) and outfield players in accurate long balls with 115. Zimmerman’s efforts were also celebrated at the 2022 MLS All-Star Game presented by Target, where he represented the MLS All Stars alongside Mukhtar. At the international level, Zimmerman was crucial in the United States Men’s National Team’s qualification to the FIFA World Cup Qatar 2022™, captaining the US and appearing in 10 matches. The club and country captain owned a 6W-2L-2D record, five clean sheets and a goal-differential of +10 in route to clinching a spot in Qatar 2022™.

NEWCOMER OF THE YEAR: SEAN DAVIS

Sean Davis joined Nashville SC after seven prominent seasons reaching the Audi MLS Cup Playoffs in each one of them with the New York Red Bulls. Davis, whose winning mentality meshed exceptionally well with an established culture in Nashville SC, has played in every MLS match this season (32), leading outfield players in minutes played (2,663) and interceptions (56). Career-wise, Davis reached his 200th MLS Regular Season appearance on Aug. 27 as the team earned a decisive three-goal shutout at Vancouver Whitecaps FC.

GOAL OF THE YEAR: ALEX MUYL (GOAL VS. CF MONTRÉAL MAY 18 AT GEODIS PARK)

Alex Muyl’s goal against CF Montréal on May 18 got the party started at GEODIS Park and earned him this season’s Goal of the Year. After an electrifying sequence that started with a long pass from goalkeeper Joe Willis, in fluid motion, Muyl corralled the pass off his chest and darted towards the 18-yard box. Coming from the right side of the pitch, Muyl cut inside while dragging a defender to his left and fired a rocket off his left foot that curled into the upper portion of the side netting (WATCH HERE).

HUMANITARIAN OF THE YEAR: TAYLOR WASHINGTON

Taylor Washington continues to stand as a pillar for the Nashville community. The winger has been a dedicated ambassador for Nashville SC’s inaugural Special Olympics Unified Team, teaching its athletes how to play soccer, and supporting them in their first-ever match, which took place following a Nashville SC vs. LAFC match on July 17 (WATCH HERE). Washington has also been influential in the club’s Kick Childhood Cancer initiatives since 2020, making several hospital visits and raising awareness within the community on childhood cancer. Most notably, as part of the KCC acts of kindness initiative this year, Washington surprised pediatric cancer patients and health care providers at the Children’s Hospital at Vanderbilt. In addition to children, Washington spends time serving food at the local food kitchen and providing guidance for unhoused citizens in Nashville.