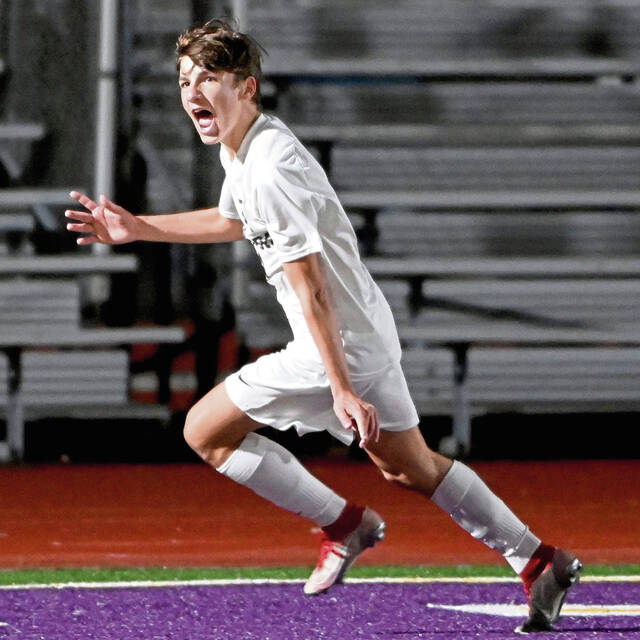 Lukas Petersen said he needed time to get to know his team, his players and his opponents.

He was, after all, hired in August to be the Franklin Regional boys soccer coach.

About four weeks into his first year, the Panthers are finding their rhythm and adapting to Petersen’s system.

The Panthers started 1-3 but made a fast turnaround, winning six in a row leading up to a rematch with No. 1-ranked Plum on Sept. 27 on the road.

“We have found a little more discipline,” Petersen said. “We will see if we found anything meaningful (against Plum).”

They sure did, knocking off the powerful Mustangs, 1-0, on a Danny Christafano goal in the final minute of the first half.

The Panthers outscored their opponents 39-2 during the seven-game win streak.

The Franklin Regional football team was looking to carry the momentum from its upset of No. 1 Gateway into Shaler on Sept. 24. While the Panthers continued to move the ball and put up points, they lost a heartbreaker to the host Titans, 42-41, in double overtime.

Quarterback Roman Sarnic scored four touchdowns, the last of which came in the second OT on a 10-yard run to make it 41-34.

Shaler then scored on a 3-yard pass from Keegan Smetanka to Joey DeSabato, and the Titans went for two, with Brandon London catching the pass conversion from Smetanka for the win.

Ayden Hudock had two touchdowns early to give the Panthers a 13-0 lead.

Franklin Regional was 2-2 (1-0 5A Big East) heading into a home matchup against Plum.

Junior Alu Boyle (86) and freshman Gianna Johnson (91) advanced out of the Section 3-3A tournament at Greensburg Country Club by meeting the target score of 92.

Boyle shot an 87 and Johnson a 92 in the first round of the WPIAL tournament at Youghiogheny Country Club. The final round was scheduled for Oct. 4 at Valley Brook CC

On the boys’ side, senior Noah Shilling (73) and freshman Colin Holt (82) qualified at the Section 4-3A tournament at Willowbrook Country Club.

Shilling shot a 79 in the first round of the WPIAL tournament at Champion Lakes and made the cut for the final round scheduled for Oct. 6 at Allegheny Country Club. Holt shot a 96 and did not qualify.

The WPIAL girls tennis doubles section tournaments were set for Sept. 28-29 around the district. Franklin Regional was set to compete in the Section 1-3A tournament.

The top four teams in each section advanced to the WPIAL finals set for Oct. 5-6 at Bethel Park (3A) North Allegheny (2a).

Checking in on Franklin Regional athletes playing in college:

• Grove City: Sophomore defender Luke Kimmich had an assist in a 3-0 victory over Chatham. He added another helper for the Wolverines (4-4) in a 6-0 victory over Franciscan.

• Penn State Behrend: Sophomore Blake Cooper scored the game-winning goal with 36 seconds left in regulation as the Lions edged past Marietta, 2-1. He also had an assist in the victory, which moved Behrend to 4-1-3 on the season.

Bill Beckner Jr. is a Tribune-Review Staff Writer. You can contact Bill by email at bbeckner@triblive.com or via Twitter .