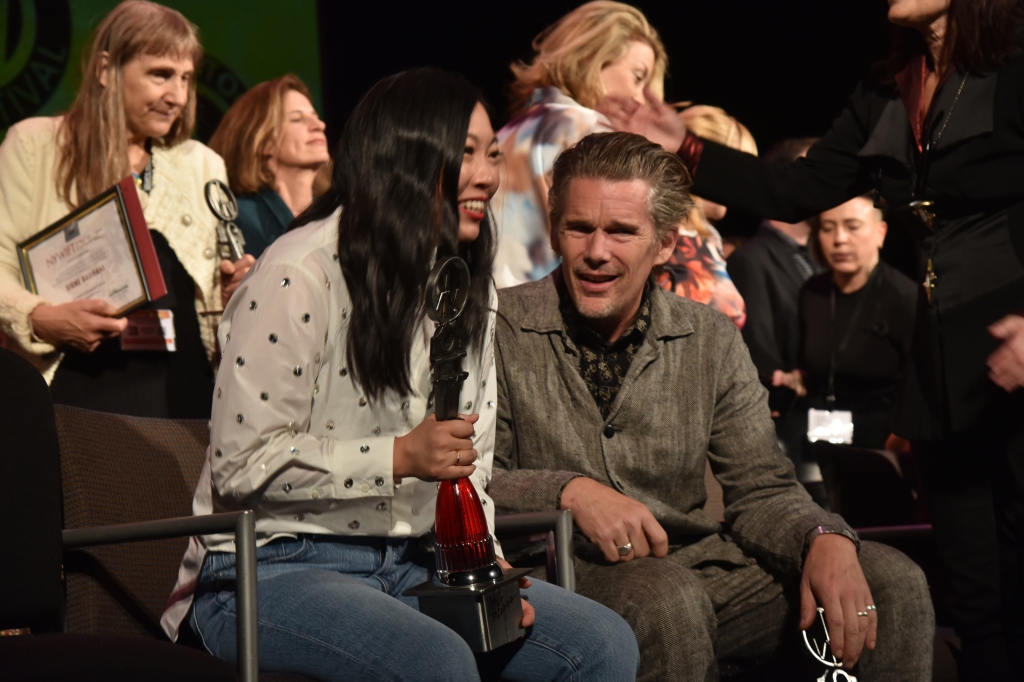 KINGSTON, N.Y. — From Awkwafina to Vera Farmiga, movie stars at the Woodstock Film Festival Maverick Awards ceremony on Saturday took note of their ties to the region as part of their careers’ trajectories.

Actor Ethan Hawke, once a Woodstock resident and a festival alumn, accepted the Maverick Award at the ceremony at the Ulster Performing Arts Center, saying that “it takes a community for one person to break through a closed door.

“We are only as good as our friends, as our community, as all the people here tonight,” Hawke said during his acceptance speech at the Midtown theater.

“So, if one of us is a maverick, then, we all must be,” he said. “So I thank you for being a maverick with me. I congratulate you on your award,” he said to laughs from the audience.

He added, “We all know that as individuals and collectively, we can do a hell of a lot better and we’re going to try.”

Presenting the award to Hawke was actor Amanda Seyfried, who touted that she is an area resident and starred opposite Hawke in “First Reformed.”

Accepting the new Transcendent Talent Award recipient was Awkwafina, who said she used to hear about the festival when she was an intern for the Albany Times Union as she went to SUNY Albany.

“I don’t know what I’m doing at any given time, but I follow a feeling that somehow feels right,” she said. “I hope that you don’t know what you’re doing the whole time and that you follow that feeling and hopefully it leads you to a place like here.”

Also with strong local ties was actor Vera Farmiga, presenting the Fiercely Independent Award to director and writer Debra Granik. Farmiga said that Granik — also known for “Winter’s Bone” and  “Leave No Trace” — had shot some of Farmiga’s home movies, and joked that she might have to sell them to pay for Central Hudson bills. She said that Granik’s 2004 film “Down to the Bone” was her break, and was shot in her hometown of Ulster County.

Farmiga also made a passionate rallying cry in support of Ukraine at the beginning of her introduction. “Ukraine will never be Russia,” she said.

Kingston Mayor Steve Noble spoke at the beginning of the ceremony, noting that four films in this year’s festival were shot in Kingston.  When the festival started 23 years ago, “We were not an arts city to the extent that we are today,” Noble said, adding that Kingston is friendly to filmmaking.

The Trailblazer Award was given to Arianna Bocco, President of IFC Films and was presented by documentary filmmaker Marina Zenovich.

“Amerikatski,” directed by Michael Goorjian, “is a story of a rarely told diaspora,” according to a festival jury statement. “It’s a transportive movie that connects you across time, culture, and ethnicity.  Profoundly human and bursting with heart, and clearly, deeply personal.” The film was also honored for its cinematography.

“Last Flight Home,” directed by Ondi Timoner, won Best Documentary Feature, “for its intimacy, courage and mastery of observational cinema in a film that is simultaneously deeply personal and yet profoundly universal,” the jurors’ statement said.

Other awards winners were:

• Excellence in Directive a Narrative Film: “My Love Affair with Marriage,” directed by Signe Baumane.

• Best Short Documentary: “As Far As They Can Run,” directed by Tanaz Eshaghian.