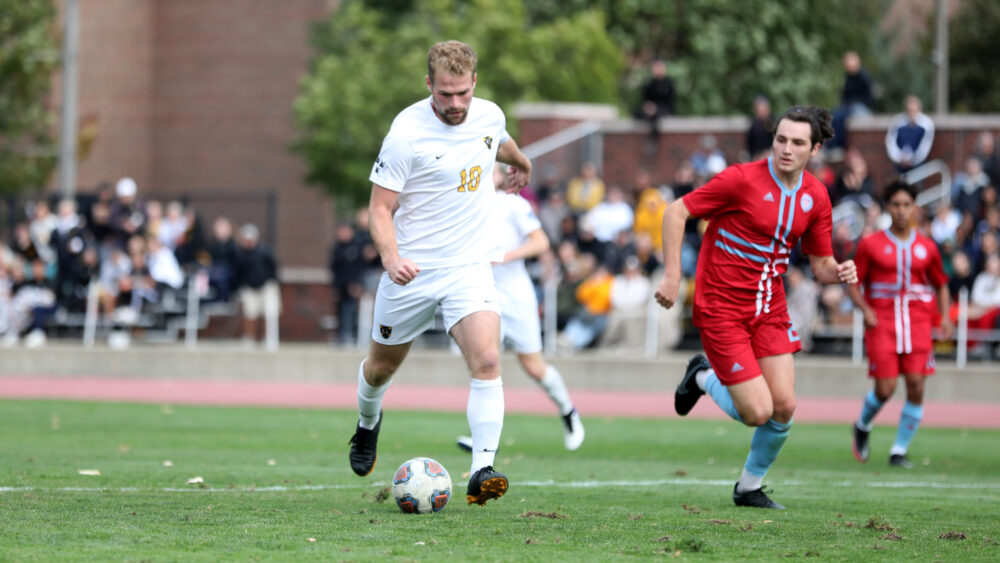 WHITEWATER, Wis. – No. 7 Gustavus men’s soccer Sunday evening made the trip to eastern Wisconsin and came away with a 3-3 draw at UW-Whitewater. The Gusties, still unbeaten, move to 7-0-3 on the season, while the Warhawks are now 6-4-1.

UW-Whitewater took an early 1-0 lead just 2:11 into the match on an own goal that deflected off a couple Gustie players. eight minutes later, Otis Anderson (Jr., Minneapolis) scored unassisted to tie the game. The Warhawks regained the lead in the 39th minute on a penalty kick, but once again the Gusties answered as Raphael Cattelin (Jr., Edina) tallied his second goal of the season with the help of Jack Knight (Jr., Verona, Wis.) and the score remained 2-2 at half.

Less than four minutes into the second half, the Warhawks went up 3-2 and held that advantage until the 75th minute as Anderson scored his second goal of the game, and fourth of the season, assisted by Carlos Robles (So., Minneapolis).

The Gusties outshot Whitewater 22-16 but the Warhawks had an 8-4 advantage in corner kicks. In 77 minutes of play, Wesley Sanders (Sr., Urbandale, Iowa) allowed three goals and made three saves. Egan Bedwell (So., Milwaukee, Wis.) finished the game for his first minutes this season and did not face a shot.

Gustavus returns to MIAC play Saturday at home against Concordia. Kickoff is slated for 3:30 pm