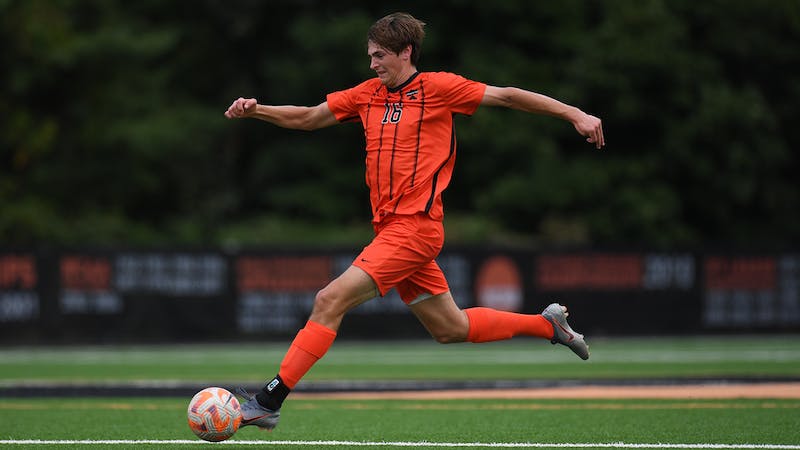 Expectations are high for the Tigers this year as they defend their league title, coming off an unblemished 7–0 Ivy League campaign. The Ivy League preseason poll predicts the Tigers will once again finish atop the Ivy League.

While aware of the expectations, the team remains focused on the work ahead. “We honestly didn’t pay any attention to the polls,” junior forward Walker Gillespie told The Daily Princetonian. “We won every game in the Ivy League last year, so it was no surprise that we were favored coming in. However, we are a completely different team this year with a different identity but are still very confident in our ability to win the league.”

The Tigers looked to bounce back from a 2–1 loss to the St. John’s Red Storm against a Dartmouth team that hopes to defy expectations, as the same Ivy League predicts them to finish seventh.

The Tigers dominated early, producing two shots on goal in the first 10 minutes while also dominating possession. The first real chance for the Tigers came in the 15th minute when first-year player Jack Jasinski played a cross in from the right wing that was deflected by Big Green goalkeeper Costi Christodoulou. The feet of senior rebound Ryan Clare, who attempted to slot the bottom right corner, forcing a save from Christodoulou who promptly cleared the ball out of Big Green territory.

Christodoulou’s play was one of the only bright spots of the first half for the Big Green, but his day was cut short after a rough two-footed tackle in the 30th minute earned him a red card, leaving Dartmouth a man down for the rest of the bout.

The Tigers kept up the pressure and dominated the first half. Although the score remained 0–0 after the first 45 minutes, the Tigers produced nine shots (five on goal), while the Big Green failed to record a single shot. More than 50 percent of the Tigers’ possession in the first half was held in the attacking third.

The Tigers’ persistent attack finally paid off in the 56th minute as they broke the draw on the first corner kick of the half. Senior Mateo Godoy played a beautifully curled ball to the back post where he is connected with the head of Gillespie, who struck the ball into the bottom left corner. It was Gillespie’s first goal of the season and Godoy’s second assist.

The Tigers survived a late surge from the Big Green to ultimately finish the game with a score of 1–0.

While the team is happy with the win, the road to repeat as Ivy League Champions is a long one. “Everyone on the team understands that,” Gillespie said. “And we aren’t taking a single game for granted because you have to win every game if you want to win the league. While we’re excited about the win, we know that this is just the first of seven that we need to have if we want to win this year.”

The Tigers return home on Oct. 4 to take on the Monmouth Hawks (5–4 overall, 1–4 Colonial League) in a non-conference matchup, and then continue Ivy League play on Oct. 8 against the Yale Bulldogs (4–1–3 overall, 0–1–0 Ivy League).

Diego Uribe is a contributor to the Sports and News sections at the ‘Prince.’ he can be reached at du5555@princeton.edu or on Twitter @diego_u11.

Get the best of ‘the Prince’ delivered straight to your inbox. Subscribe now »