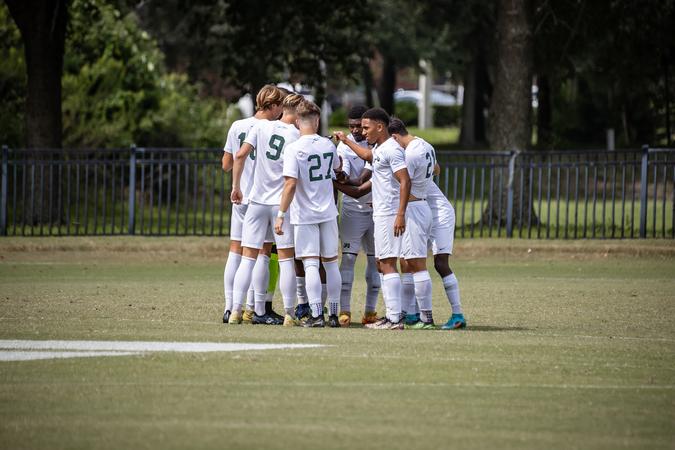 WINSTON-SALEM, NC – Jacksonville Men’s Soccer dropped their third consecutive game by a score of 1-0 on Tuesday night, this time to Wake Forest, the number four ranked team in the country.

The game followed a theme that has emerged in the last three Dolphin defeats of JU not enjoying much possession in the opening 45 minutes. After the first half, possession percentage would read 63% to 37% in favor of Wake.

Despite the unfavorable possession stat, the JU back four was still resilient in their ability to hold strong and limited Wake to just one shot on goal in the half.

Entering the second frame still locked at one, the Demon Deacons continued their hold of possession and after 11 minutes, they would finally break through.

In the 56th minute a ball was swung into the box, bobbled around and was hit into the bottom right corner by Wake’s Oscar Sears making the score 1-0. A score that would stick for the remainder of the match.

In the loss JU saw some offensive production out of Ed Port who notched off two shots while Cole Reasonover added one on goal.

Both Jabari Gray and Christian Sekanina split time in net for the ‘Phins, allowing one goal on three shots on net.

The ‘Phins now get ready to return home this Saturday where they will battle ASUN opponent Liberty in what will be the team’s white out game at 7 pm.