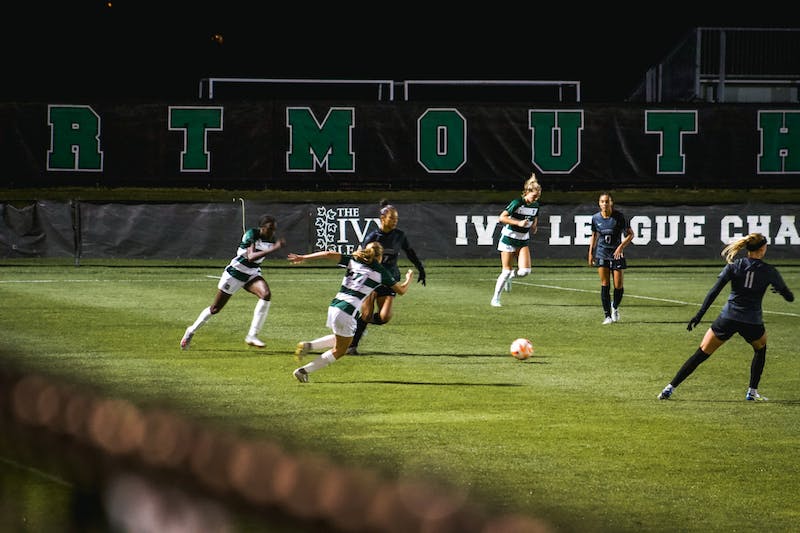 The men lost 1-0 and the women 2-0, with both teams yet to notch an Ivy League win


This weekend, the men’s and women’s soccer teams faced off against Ivy League competitor Princeton University. Dropping their first match of Ivy play, the men’s team fell to a 2-3-2 record while the women’s team lost a hard game, moving to 5-4-1 on the season and 0-2 against conference opponents.

Battling the reigning Ivy League champion and preseason favorite Princeton, the men’s team showcased a strong performance for the parent’s weekend crowd. Despite the Tiger’s dominant time of possession, the Big Green’s defense remained stout; However, while attempting to interrupt a one-on-one fastbreak, starting goalie Costi Christodoulou ’25 collided with an opposing forward. Drawing a red card, Christodoulou’s tackle forced Dartmouth to play man-down for the remaining nearly 60 minutes of the game.

Inserting reserve keeper Dylan Buchanan ’25, Dartmouth continued to put forth a staunch defensive effort. Yet, in the 55th minute, Princeton forward Walker Gillespie scored a set piece goal. . Despite some scrappy offense late from the Big Green, the second-half score allowed the visiting Tigers to get out of Hanover with a 1-0 victory.

After the game, men’s soccer head coach Bo Oshoniyi said he was proud of his team for a gutsy performance.

“[Our guys] battled and fought and gave ourselves a chance even down to the last second to possibly get a draw,” Coach Oshoniyi said. “[We] bent a little bit in the first half but didn’t break … we have all the faith in all of our goalkeepers.”

Replacement goalkeeper Dylan Buchanan ’25 added that he was frustrated with losing in such a strong effort.

“We had a plan once we went a man down … We wanted to push them out wide, and that’s exactly what we did,” Buchanan said. “The only chance we were going to give them was set pieces, which we did.”

Continuing its up and down season, the loss forces the Big Green to look ahead. Matching up against a solid College of the Holy Cross team on Tuesday and seeking their first conference win at the University of Pennsylvania on Saturday, Buchanan said that he has faith in the group moving forward.

“We have come back from a loss [before]Buchanan said. “So I think this will hurt for now, but [against] Holy Cross, we are going to come back strong, get a win, get our confidence back [and] go into Penn ready to go.”

The women’s team fared similarly in their bout against Princeton. In a rain-delayed match, the Big Green lost to the Tigers 2-0 amidst poor conditions. The Princeton offense started strong, with forward Tordin Pietra notching the Tiger’s first goal in the sixth minute. However, the Big Green failed to capitalize on its opportunities as post Sydney Brown’s ’25-corner kick redirect and forward Allie Winstanley’s ’23 left-footed strike failed to reach the back of the net. With a late goal in the 87th minute as the dagger, the Tigers sealed the victory.

Despite the loss, goalkeeper Charlotte Cyr ’23 put on a strong performance, notching a career-high 10 saves. Warding off a strong Princeton attack, a leaping save from Cyr early in the first half helped hold the Tiger’s lead at one and keep the Big Green within striking distance.

On the heels of a pair of losses, the team hopes to build momentum. As the team continues further into Ivy League play, Winstanley said they are focused on maintaining a productive mindset.

“I think that in the second half of the season, one of the most important things becomes … healthy staying and finding ways to set aside any academic stress and just be able to show up to training and give 100%,” Winstanley said. “I think that’s something our team is good at, but it’s always something that we can be aware of and continue to try our best [at].”

Looking forward to a matchup at home against Yale University, women’s soccer seeks redemption with its first win in conference play on Saturday.