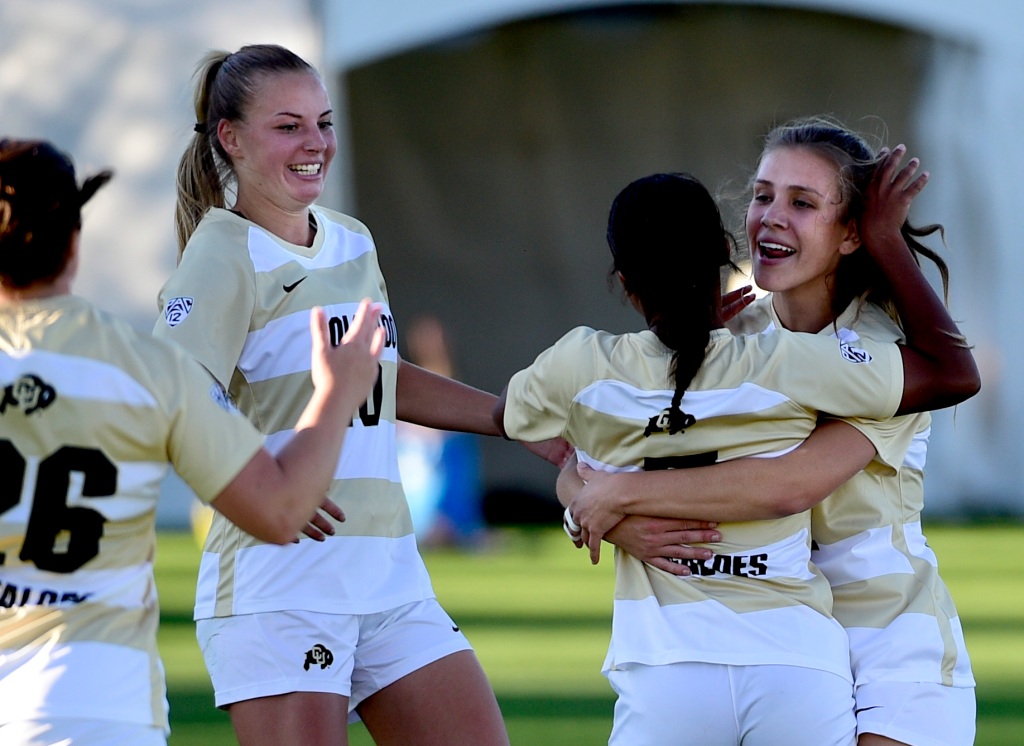 When Jenny Beyer arrived in Boulder, she still was working through a language barrier, had to weather the COVID shutdown and, not long after she finally took the field for the Colorado soccer team, was forced to the sideline due to a knee injury.

It was, in a way, a world of adversity while getting used to being a world away from home.

As the Buffaloes look to get back on track this weekend during a challenging two-game trip through Washington, the German player has become a key cog in the high-scoring attack, even after missing the first game of the season while competing for Germany’s U20 team. Unfortunately for CU, Beyer will miss Thursday’s match at No. 15 Washington State after receiving a red card during the emotional aftermath of the controversial last-second goal in a loss to Arizona State on Friday.

Beyer is expected to be back on the pitch when the Buffs complete the trip on Sunday afternoon at Washington.

“My goal was always to play in college in the US and everything,” Beyer said. “It’s a super-high level here, and it’s an amazing opportunity for me to develop off and on the field. It’s a different way of playing soccer, and just being so far away from home. I moved out from my parents when I was 15 and went to boarding school, but still saw (my parents) every weekend. They weren’t that far away.

“It felt like home from the first second I was here. I loved the team as soon as I got here. They helped me with my English, which wasn’t very good.”

Beyer initially encountered visa issues that she said would have prevented her from playing during her planned freshman season of 2020. She assumed she would make her CU debut in the 2021, but when the 2020 season was pushed into early 2021 due to the COVID pandemic, Beyer was able to suit up.

She made 10 starts, recording her first collegiate point on an assist against Northern Colorado, but that shortened season was shortened further when Beyer suffered a knee injury that also kept her out of the 2021 campaign.

Following her national team duties in August, Beyer rejoined the Buffs for the second game this season and promptly posted points in each of her first five appearances (two goals, three assists). While Shyra James (10 goals) and Stanford transfer Civana Kuhlmann (seven goals) have done the bulk of the heavy lifting for a CU offense that goes into the weekend tied for fourth in the nation in scoring (3.3 goals per game), players like Beyer and freshman Juliauna Hayward (two goals, three assists) have given the Buffs too many weapons for opposing defenses to focus upon.

“We have a lot of connections (internationally) and we know the different levels and where they’re at, but a lot of it is a little bit of a crapshoot. Because with Jenny, we never saw her play live,” CU head coach Danny Sanchez said. “We have a good connection of people that we trust in evaluations, and it helps when we bring them in.”

After storming out of the gate with a 5-0-1 mark, the Buffs are just 1-2-1 over the past four games. That mark is skewed somewhat by last week’s controversial finish, when the Buffs were away from at least settling for a comeback draw before ASU was awarded the winning goal with three seconds left on a shot that may or may not have crossed the goal line.

“It just didn’t happen for us,” Sanchez said of the setback against ASU. “But as I told the team, the game has a way of evening out over a season. Nobody is feeling sorry for anybody in this league. We have to refocus and get ready for the Washington schools on the road.”

NOTES: Washington State and CU have had one common opponent as both clubs played at Michigan. The Wolverines handed WSU its only loss of the season, 2-1, on Aug. 18 while the Buffs posted a 1-1 tie at Michigan on Sept. 8…The Cougars have not allowed a goal over the past three games and opened Pac-12 play with a 1-0 win at Oregon State last week…The Buffs have lost their past three matches against WSU. The Cougars lead the all-time series 8-4-0…Grayson Lynch, WSU’s second-leading scorer, is a Castle Rock native who played at Rock Canyon High School…Monarch graduate Brae Cole is a sophomore player for the Cougars…WSU is unbeaten in its past nine home games (6-0-3)…CU completes its road trip at Washington on Sunday (2 pm MT).