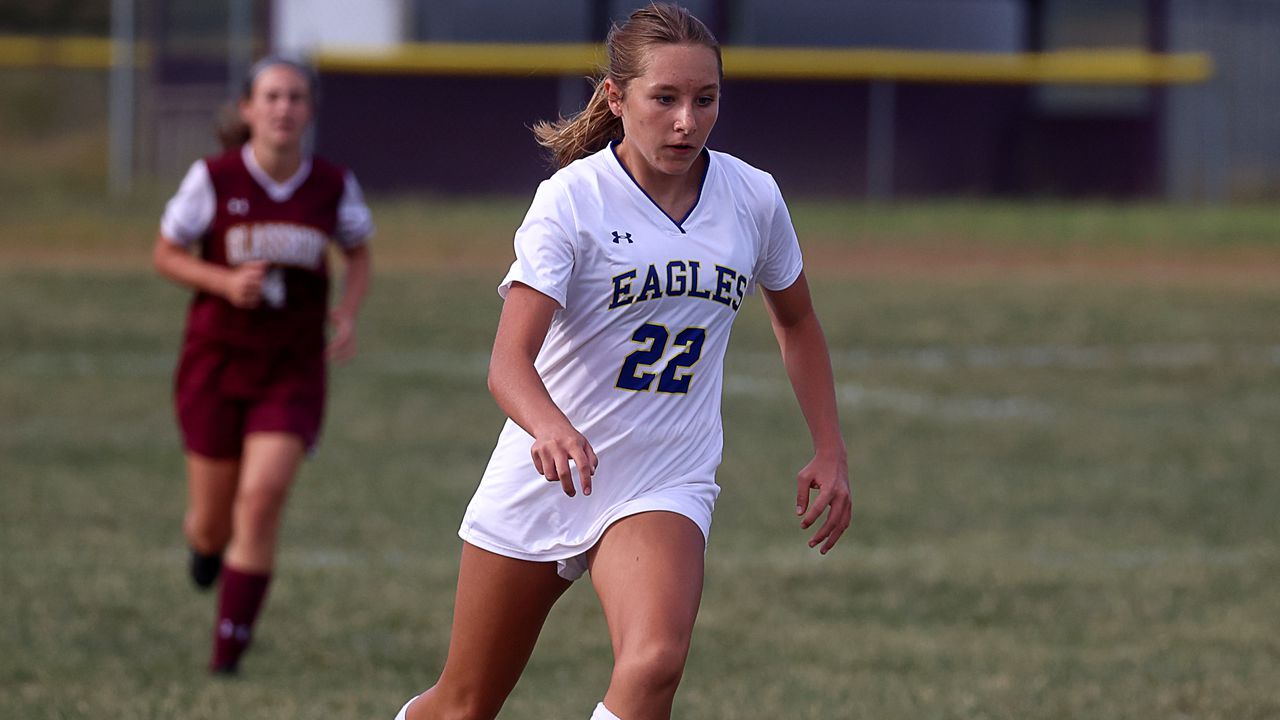 Pennsville coach Samantha Trapp admits that coaching a young team can be exasperating at times.

“I sometimes feel like a broken record, but I have to understand they’re new to the program, new to this level and new to my coaching style, so there’s a lot of learning for everybody,” Trapp said. “I’m learning about them and they’re learning about me but we’re all working together for the best result.”

On Thursday, the Eagles got the kind of result they could all be happy about – a hard-fought 2-1 victory over Glassboro in a Tri-County Conference crossover game in Glassboro.

The freshmen “dream team” duo of Taylor Bass and Molly Gratz scored the goals for the Eagles, who were coming off an impressive 2-0 win over Pitman on Tuesday. They’ve won three of their last four games to improve to 5-4 on the season.

Gratz scored the game-winner on a nifty, unassisted goal about 15 minutes into the second half to break a 1-1 deadlock. She used her footwork to slip past a defender before splitting two more defenders and perfectly placing a left-footed shot into the upper right corner of the net, just beyond the reach of Glassboro keeper Suni Moore.

SEE A VIDEO OF GRATZ’ GAME-WINNER BELOW.

“I just saw an opening and took it,” said Gratz, who has three goals this season.

“We’re rebuilding, but the freshmen have stepped in and stepped up,” Trapp said. “(Gratz) plays year-round, so she has one of the highest soccer IQs on our team and we’ve been focusing on not just shooting on the net, but placing it well. We’ve been working on hitting the corners and making it more difficult for the goals, and that’s been clutch for us the last couple of games.”

Gratz, an attacker, and bass, a striker, are doing their best to fill an offensive void after the graduation loss of last year’s leading scorer, Kaitlyn Samuels, who netted a team-high 24 goals.

Bass started the scoring with an unassisted goal midway though the first half – her team-leading eighth of the season. She worked her way past three defenders and, as she moved in on Moore, was able to place a shot into the wide open left side of the net.

“We have a lot of fun together,” Gratz said. “We met last year and just started playing soccer together for the first time thisseason and we just clicked, so I came up with the nickname ‘dream team’ for us. At practice we’re really competitive but on the field, we make a good team and pass to one another. I try to look for her and she’s a good finisher.”

Gratz has taken over for Samuels at center mid, while Bass took over the front-line spot of Ryane Wood, who scored 10 goals last season. The duo, along with Marley Wood, are the three freshmen in the starting lineup for the Eagles, who graduated five seniors from a team that went 12-6-2 and reached the South Jersey Group 1 final a year ago.

Buy these game photos: We offer reprints in a variety of sizes. Open the gallery above and select “BUY IMAGE” to purchase yours now.

The Eagles posted their seventh straight win over Glassboro, but unlike last year’s 8-1 final, this one was a battle to the final buzzer.

The Bulldogs (2-5-1) have been competitive in most games this season, and had several good opportunities scoring to tie it after Gratz put the Eagles ahead.

Glassboro’s best scoring chance came when freshman Amina Brown launched a direct kick that slipped through Borden’s legs and hit the right post before deflecting in front of the net, where a defender was able to clear it from harm’s way.

SEE A VIDEO OF GLASSBORO’S NEAR MISS BELOW.

Borden finished with nine saves for the Eagles.

The lone goal she surrendered came off a corner kick when Brown’s kick ended up in a cluster of teammate Alana Figueroa, two Pennsville defenders and Borden, and the ball trickled out behind them and into the net to tie the game at 1-1. Figueroa was credited with the goal, her third of the season.

Moore stopped 13 shots for the Bulldogs.

Glassboro entered this season having won a grand total of just 10 games over the previous five seasons, so a competitive loss like Thursday’s is another sign that the program is beginning to turn a corner.

“When they came here last year, we weren’t competitive at all,” said Glassboro coach Scott Rogers, in his 12th season. “This is old Glassboro soccer”. I’m beyond proud of what they did. They could easily have given up after Pennsville scored that go-ahead goal. We had a defensive mental breakdown there and ran with (Gratz) instead of running to her and cutting her off, but overall, I’m thrilled to death.

“I was fully expecting to get the equalizer. I was looking forward to overtime or maybe finishing in regulation. This, for me, is like a win. A lot of them are upset. They don’t like to lose and I love that. It’s a change in the culture. We’ve been in a dry spell and now we’re knocking at the door and I’m really excited about what’s to come. It’s just a matter of taking that next step.”