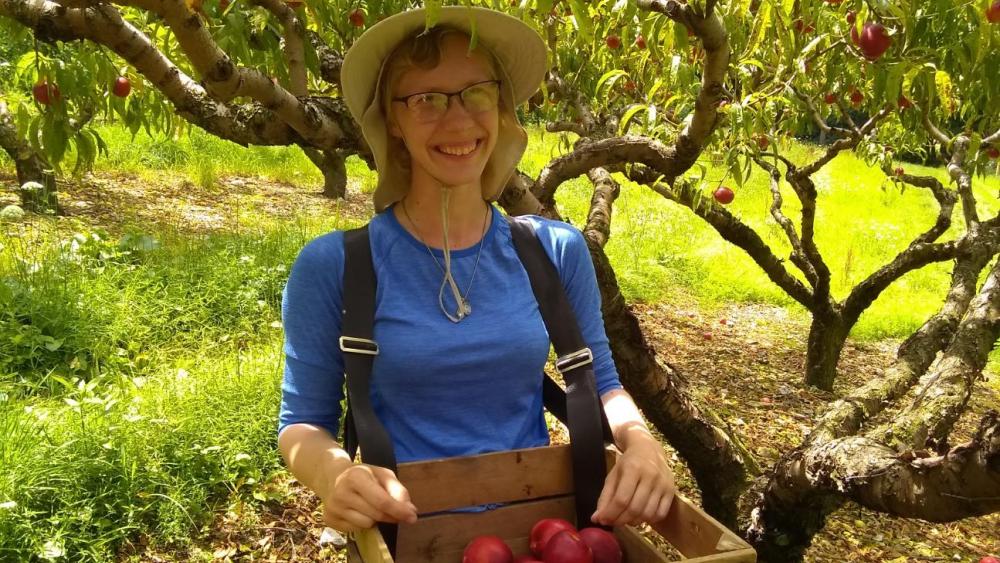 UNIVERSITY PARK, Pa. — When Penn State alum Sara Hricko first came to the University as an undergrad, she had every intention of graduating with a degree in mathematics. But one elective in the College of Agricultural Sciences ending up changing the course of her education, and eventually, her career.

When she was in her very first semester at Penn State, Hricko’s advisor recommended she take a science general education course. She chose PPEM 120 “The Fungal Jungle: A Mycological Safari from Truffles to Slime Molds,” a course that explores the role of fungi in everyday life.

Hricko enjoyed the class so much that she switched her major from mathematics to plant sciences, with a minor in plant pathology. And recently, after earning her master’s degree in plant pathology at Michigan State University, Hricko has once again returned to Penn State — this time as an extension educator.

“I’d always been fascinated by mushrooms and spent a lot of time foraging for wild fungi with my dad, but I hadn’t realized people could study them and make a career out of the topic,” Hricko said. “The Fungal Jungle course opened my eyes to the amazing discipline of plant pathology and mycology, and since then, I’ve been continuing on, full-steam ahead!”

According to Hricko, her love of plants continued to develop as she took more classes at Penn State and worked in several labs within the Department of Plant Pathology and Environmental Microbiology. But she first became inspired to be an educator specifically while working as an undergraduate researcher with Gary Moorman, a now-retired Penn State plant pathology professor who also conducted extension programming related to diseases of ornamental plants.

Now, in her current role, Hricko is based in Columbia County — working with vegetable, fruit and greenhouse growers as she shares information and connects them with programs and resources to help them grow successful businesses.

Hricko said her education at Penn State, as well as her experience helping to manage a farm of her own, has allowed her to feel confident educating other growers.

“After graduate school, I returned to Pennsylvania where my husband and I now co-manage a 100-acre tree-fruit farm,” Hricko said. “Now that I have both the academic background and the practical experience from actually being a grower, I feel even more strongly about my job communicating with and understanding the local growers I work with. I’ve gained an enormous amount of appreciation for those who grow our food and what they need to succeed.”

Carolee Bull, head of the department and professor of plant pathology and systematic bacteriology, said she fondly remembers Hricko’s time as a student in the Department of Plant Pathology and Environmental Microbiology and looks forward to working with her again as a Penn State Extension educator.

“We often say that once you are a member of the PPEM family, you always are, and Sara is a great example of that,” Bull said. “As an undergraduate, Sara worked in many labs within our department, as well as attending our annual dinners and other events with her family. We were delighted when she sought an MS in plant pathology and are even more delighted that she is back and part of the Penn State team again.”

Moving forward, Hricko said that while she’s not sure how her career will continue to evolve, she wants to continue to help spread the knowledge she’s gained both in school and in the field.

“Education is a huge part of my life, and I believe that no matter where life takes me, that will be part of it,” she said. “I think that’s why Penn State Extension fits me so well. It’s all about education, bringing scientific discoveries to the field, and bringing real-world problems back to the lab to find solutions.”