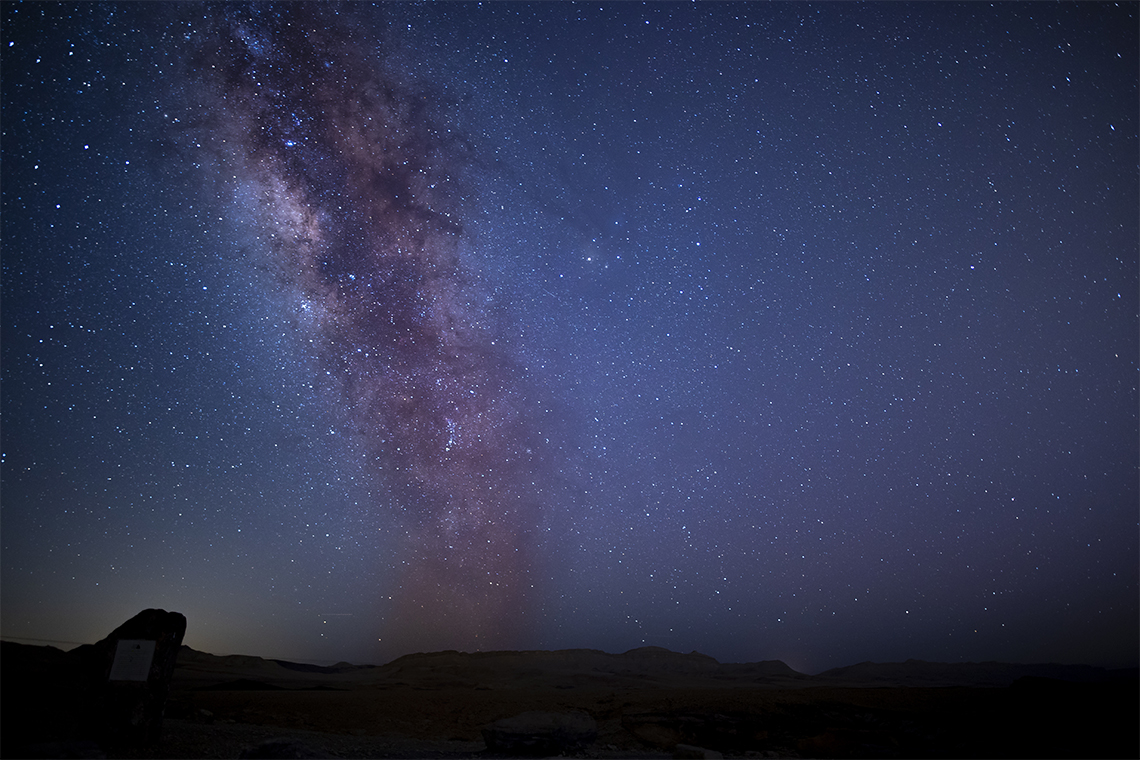 Grace Yu remembers marvelling at the night sky as a child. Today, that childhood memory lives on as she studies the stars that make up the Milky Way.

Working with Ting Li and Joshua Speagle, assistant professors in the University of Toronto’s David A. Dunlap department of astronomy and astrophysics in the Faculty of Arts & Science, Yu is working on a new project, titled “Mapping the Milky Way a Million Light Years.”

The team will characterize and track blue horizontal branch (BHB) stars, which, because of their brightness, can be detected when they are located at the periphery of our own galaxy to measure the density profile of the Milky Way – especially at its periphery.

“The end goal is to detect BHB stars, all the way down to 300 kiloparsecs, roughly a million light-years away, and characterize their density to distance,” Yu says. “Then we will use these BHB to understand more about the Milky Way.”

Yu is one of 36 undergraduate students from across Canada to be selected for the 2022 SUDS Scholars program at U of T’s Data Science Institute’s (DSI). The program pairs students interested in a data science career with DSI researchers to conduct interdisciplinary, hands-on research. It is one of several opportunities that the DSI hosts to foster data science innovation and collaboration.

At present, little is known about the galaxy beyond 100 kiloparsecs, a measure of distance in astronomy, where 1 kiloparsec equals 3.6 light-years, a unit of astronomical distance equivalent to the distance that light travels in one year.

Although BHB stars are ideal tracers for mapping our own Milky Way, there is another type of star, the so-called “blue straggler” (BS) stars, which lie in a similar colour space as the BHB stars. But BS stars are generally closer to Earth and cannot travel as far as BHB stars do, making BHB stars ideal to study the periphery of the Milky Way. A goal of this research project is to develop a tool to separate the distant BHB stars from nearby BS stars.

Using publicly available data from the Dark Energy Survey (DES) – one of the largest astronomical cameras that has surveyed the dark sky – the team found a clear indicator of separate patterns between BHB and BS stars thanks to the unprecedentedly high precision data from DES that measures the brightness and colours of the stars better than 0.5 per cent.

In particular, using a machine learning method called the support-vector machine, a supervised learning model associated with learning algorithms that analyze data for classification, Yu has made great progress in identifying clear, separable boundaries between the stars. Yu is also planning to continue this research under the supervision of Li and Speagle.

With first-hand experience blending statistics, machine learning and astronomy for research thanks to the DSI, Yu hopes to explore how computer science is shaping other fields in the future.

Using poetry to elevate the voices of African, Caribbean and Black women with HIV

Yu’s work is just one of several student-led projects supported by U of T’s Institutional Strategic Initiatives (ISI) portfolio, which facilitates tri-campus interdisciplinary collaborations between researchers at U of T and partner institutions.

Lori Chambers, a former post-doctoral researcher at the Factor-Inwentash Faculty of Social Work, is using poetry, prose and spoken word performance to offer safe spaces for women to share their experiences living with HIV.

Launched in 2018, the Because She Cares project amplifies the voices of African, Caribbean and Black (ACB) women with HIV who describe the challenges they encounter working for the Canadian AIDS service and allied organizations. The project aims to develop, promote and design approaches that honour community-based, knowledge-sharing methods – and to decolonize Western ideologies in academia.

Chambers is one of nine researchers supported by the Black Research Network (BRN), an ISI that seeks to promote Black research excellence at the university through mentorship, collaboration, investment and community.

With $7,000 in seed funding through the BRN’s IGNITE grant, Chambers and five spoken word artists travelled to Quebec for the International AIDS Conference, one of the largest AIDS conferences in the world, to perform stories from the Because She Cares project.

Listen to a segment of an interview with Lori Chambers.

Chambers explains that while plays and spoken word performances are commonly used in west and south Africa for knowledge mobilization, it is an emerging space in Canada.

“Using arts-based approaches like spoken word, which is grounded in Black performance, in a Canadian space is still very new,” Chambers says.

“Storytelling is an approach that we all know, so why not bring it to the space of academia? We should develop ways of knowing that are concurrent in the communities we work with.”

Last winter, Chambers launched Because She Cares’ first spoken word film series. The collection of 12 short films outlined the challenges that African and Caribbean immigrant women who live with HIV face while working in Canadian AIDS service and allied organizations.

One of the films, HIV Stays at Home, explored the ethics around disclosing HIV status in the workplace, a prominent challenge for people who wish to leave the HIV sector. Another, Living This Kind of Life, navigates working poverty and its effect on family dynamics. Other films addressed setting boundaries between the professional and personal – something that can be especially difficult for women who have been hired to work in the HIV services space because of their lived experience with the condition. Chambers says that professional boundaries have the potential to separate HIV-positive health and social work professionals from their own support systems, often within the HIV community.

Noah Kelly, a U of T graduate, and Emma Blewett, a third-year civil engineering student, are researching how free, unlimited transit access can improve the quality of life for Toronto youth who are experiencing homelessness.

TAP (Transit Access Project) for Youth is a student-led transit equity research project that seeks to reduce barriers to transit access. It was founded by five undergraduate students as part of Engineers Without Borders (EWB) at U of T, the largest student chapter of the Canadian non-governmental organization that takes strategic action to tackle global poverty in local communities.

Working with two Toronto-based homeless shelters and one transitional youth home, the team gave free PRESTO cards to 36 participants between the ages of 16 to 24 earlier this year. Each one came pre-loaded with a monthly pass. From there, the TAP team documented participants’ experiences with transit before and after receiving the card. This included interactions with transit authorities and riders, safety and social inclusion.

“Transit equity ensures the right to mobility,” says Kelly, co-founder of TAP. “Public transit access in Toronto is vital in exiting the cycle of homelessness because it enables youth to have job opportunities in the urban landscape, which would otherwise be limited to walkable areas.”

With $2,000 support from the Small Grants Program awarded by the School of Cities – an ISI which brings interdisciplinary urban-focused researchers, students, institutions and the public together to build equitable and sustainable cities – the group was able to hire a social worker to attend the interviews to inform youth of any programs or supports to help with their needs.

Guided by Steven Farber, an associate professor in the department of human geography at U of T Scarborough, and Stephanie Begun, an assistant professor in the Factor-Inwentash Faculty of Social Work, TAP is funded in partnership with Metrolinx, the City of Toronto’s Poverty Reduction Strategy Office and the Toronto Shelter Network, along with other stakeholders.

With a final report set to be published early next year, TAP’s data aims to fill a gap in scholarship and inform City of Toronto and TTC policy frameworks on conversations surrounding transit equity.

The project is a replication of a similar initiative that brought free transit to all people experiencing homelessness in Edmonton, Alta, in 2013. While transit discount programs do exist in Toronto, several hurdles make them insufficient, the group says.

In Toronto, the Fair Pass Transit Discount Program offers a 21 per cent discount on an adult monthly pass, which costs approximately $123 instead of the regular price of $156. To be eligible, applicants must be 20 years old or more and prove enrollment in Ontario Works,  the Ontario Disability Support Program, a Child Care Fee Subsidy (through Toronto Children’s Services) or the Rent-Geared-to-Income Subsidy – programs that researchers say aren’t by themselves enough to help youth experiencing homelessness access job opportunities.

“We have to think about setting youth up for success after they enter a shelter or transitional home,” says Blewett, financial lead at TAP for Youth. “What keeps me going in this project is being a part of research that will help young people live their lives as they should be.”

This article is part of a multimedia series about U of T’s Institutional Strategic Initiatives program – which seeks to make life-changing advancements in everything from infectious diseases to social justice – and the research community that’s driving it.