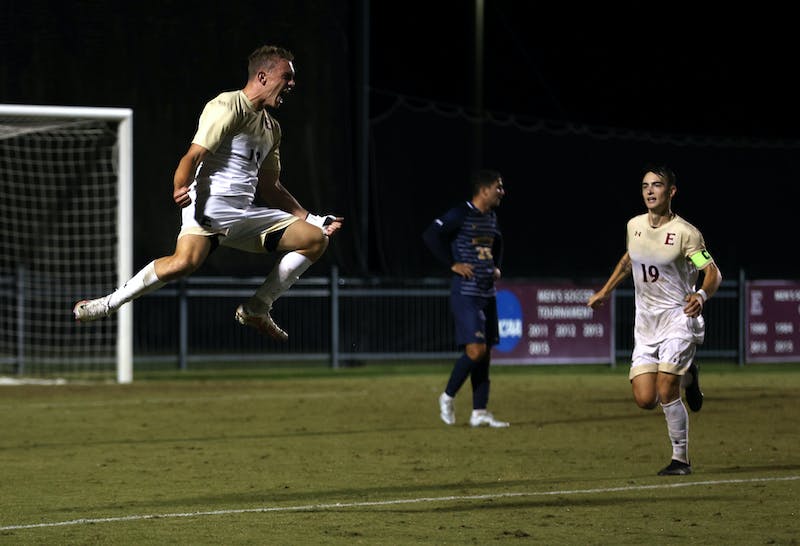 Drexel entered the match averaging nearly two goals per game and also led the conference in shot attempts with 116. However, Elon stifled Drexel’s high-scoring attack, allowing just two shots on goal by the Dragons, both of which came in the first half.

The shutout was Elon’s seventh of the season in the team’s first 11 matches. With the win, the Phoenix improved to 4-1 in CAA matches, which keeps the team alone atop the league’s standings with 12 points.

“It was a really strong collective defensive effort,” head coach Marc Reeves said. “To get all three points is what we’re trying to do every CAA game at home.”

The Dragons attempted seven shots in the first 30 minutes of the first half but could not convert on any of the chances. In the 35th minute, Elon capitalized on a corner kick opportunity, as senior defender Myson Darden scored off a corner kick from sophomore man Scott Vatne.

“I know he has a great service in the box, and he put it right on a platter for me to hit,” Darden said. “It was such a good ball that I didn’t really have to even do much, it was already almost in the goal.”

In the 67th minute, Darden found the scoresheet again, as he headed a ball across the box to graduate student defender Michael Clowwho deposited the pass for another Elon goal to put the team ahead 2-0.

Darden began his college career at Appalachian State University but transferred to the University of North Carolina Greensboro when the program folded following the 2019 season. After two years with Greensboro, Darden transferred to Elon prior to the start of this season.

While Darden has started in just five of the eight matches he has appeared in this season, Reeves said he likes what Darden has provided the team.

“We’re really pleased with him. He’s with us because he’s a great person first and foremost,” Reeves said. “He’s a good athlete and a good defender.”

The Phoenix did not concede a shot on goal in the second half and allowed just one shot attempt in the final 45 minutes against the league’s top scoring offense. For Darden, the communication between the team’s back line allowed Elon to control the match defensively.

“It starts with everyone being on the same page,” Darden said. “We’re just really solid defensively, and I think it’s been like that the whole season. We’re just all on the same page, and that’s the biggest part when you get shutouts.”

Senior forward Mason Duval tallied a third Elon goal in the 87th minute, his team-leading fifth of the season. The Phoenix then ran out the clock to secure a fourth straight conference victory.

Since losing its first CAA match against Northeastern, Elon is 4-0 in conference matches and has outscored his opponents 8-1 in that stretch. While the Phoenix is ​​alone in first in the CAA standings, Reeves said there is no reason for the team to get comfortable with its position with four conference matches remaining.

“There’s another 12 points to play for,” Reeves said. “Things can change fast in football.”

Elon continues CAA play on Oct. 8 with a home match against William & Mary. The match is scheduled to begin at 7:30 pm