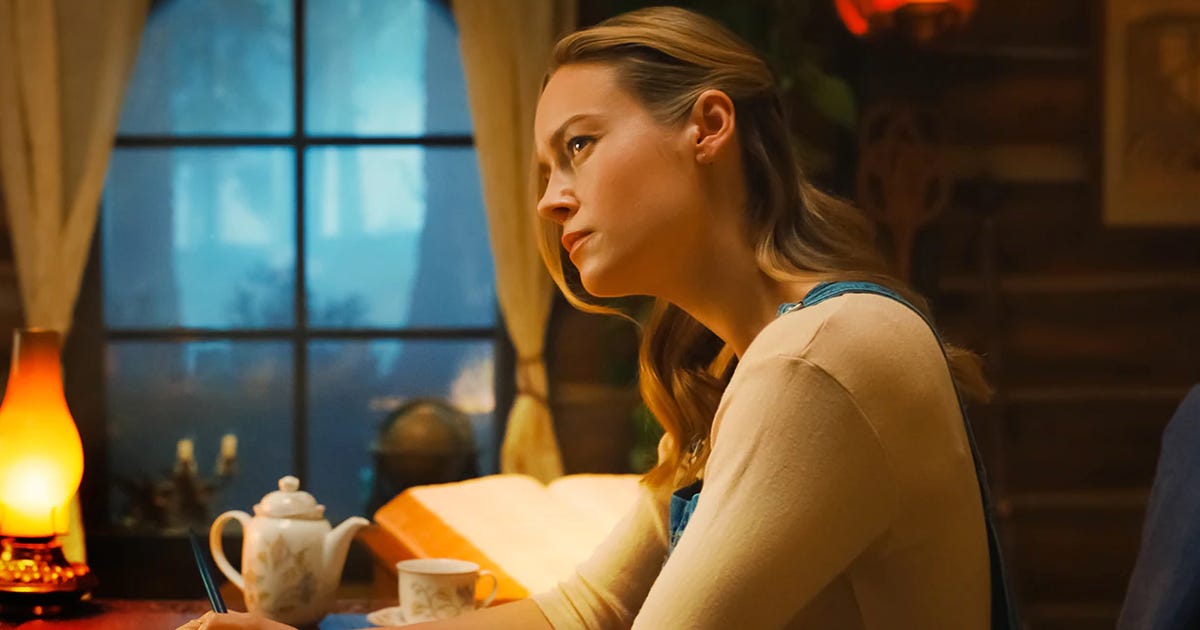 This story is part of I’m So Obsessed (subscribe here), our podcast featuring interviews with actors, artists, celebrities and creative types about their work, career and current obsessions.

If you open the Disney Plus app and look past the bold posters for Marvel and Star Wars films and shows, off to the side is a short film gem called Remembering. The delightful 8-minute film — yes that’s shorter than many YouTube videos — stars Brie Larson and explores where ideas come from.

Larson’s character is a writer who is interrupted by her phone, which causes her to lose an idea she had. Whether you’re a writer or not, you’ve likely been distracted by something on your phone long enough to lose your train of thought. It’s one of the unfortunate consequences that comes with constantly being connected and online.

It turns out that Larson’s idea wasn’t lost exactly. Instead, it’s discovered by her inner child played by the mesmerizingly genuine Dusty Peak. What ensues is an enchanting journey filled with imagination, inspiration and innocence.

Remembering was written and directed by Emmy Award-winning filmmaker, musician and actor Elijah Allan-Blitz. The short can be enjoyed by people of any age but is definitely aimed at families with small kids. Allan-Blitz’ short is a thoughtful exploration of ideas and creativity.

The film, on its own, is compelling, but Allan-Blitz also created an interactive augmented reality experience to an accompany the short. You download the Remembering: The AR Experience app on an iPhone or iPad, and during the film you’re prompted to hold your device up. The World of Imagination that’s on the screen floods out of your TV and into your living room. I definitely recommend using as big a screen as you can find.

Remembering’s AR experience is approachable and simple, which makes it so engaging. You don’t need ridiculous glasses or to be tech savvy to enjoy it.

On CNET’s I’m So Obsessed podcast, Allan-Blitz explained the origins of Remembering and its AR experience. He was influenced by writer Elizabeth Gilbert as well as reflections on his own creative process. But the real drive behind the film came from Allan-Blitz’ young neighbor.

“Our neighbor Dusty is this incredible 6-year-old who I’ve actually known since she was two. I remember it was during the pandemic, and Brie [Larson] came back in and was like, ‘You should do a movie with Dusty.’ And I was like, of course, yes. I love this,” Allan-Blitz said. “So I started working on the script. And the AR experience was always something that was there.”

Before Allan-Blitz filmed a single frame of Remembering, he carved a name for himself making compelling virtual reality experiences like Take Every Wave: Laird in VR, which was nominated for an Emmy as well as ones for PBS and Michael Pollan’s book How To Change Your Mind. In 2020, he won an Emmy for a virtual reality series that he co-created with Van Jones called The Messy Truth VR Experience. It allows viewers to see the world from another person’s perspective.

During our conversation, Allan-Blitz explains how his life as a filmmaker began as a kid making movies on VHS tape. We delve deep into what makes AR and VR compelling and why both are on different paths towards being more widely accepted. One highlight from my time with Allan-Blitz was listening to him explain a core moment from the VR experience he made for the Ken Burns documentary Defying the Nazis: The Sharps’ War.

“We re-created a moment where Martha Sharp was able to save 27 Jewish children and got them on this boat to the US. And so we put you in the perspective of standing on the boat. And you see the real survivors and the children that were on that boat, that are now in their ’80s and ’90s, in the sky, and they’d be telling their stories about what it was like to be separated from their parents,” Allan-Blitz said. “And beyond that boat, you’re looking at the water and then seeing the Statue of Liberty for the first time.”

You can watch Remembering on Disney Plus. Subscribe to I’m So Obsessed on your favorite podcast app. In each episode, Connie Guglielmo and I catch up with an artist, actor or creator to learn about their work, career and current obsessions.

Movies Coming in 2022 From Marvel, Netflix, DC and More