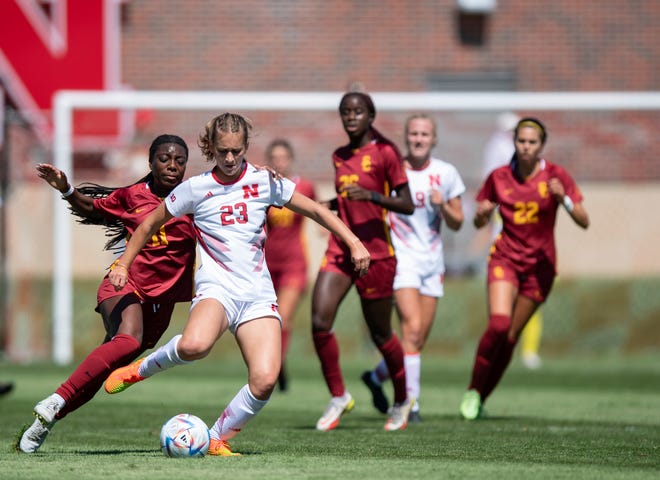 University of Southern California women’s soccer players said Brigham Young University fans directed racial slurs at them last year after USC players kneeled during the national anthem before the teams played at BYU, according to a person familiar with the situation who spoke to USA TODAY Sports on the condition they not be identified because of the sensitivity of the situation.

The USC players said BYU fans chanted, “Stand up, n-word” in reaction to USC players kneeling during the anthem before the game on Aug. 26, 2021, according to the person.

On Friday, the Guardian reported that five soccer players from a visiting team told the newspaper they heard the n-word being directed at them and their teammates from the crowd during a game at BYU in 2021. the story.

The claims come about five weeks after Rachel Richardson, a Black volleyball player at Dukesaid BYU fans subjected her to racial slurs during the BYU-Duke match in Provo, Utah, on Aug. 26 of this year.

OPINION:In BYU-Duke volleyball story, a racist, a plethora of failures, and a hero

DON’T MISS OUT: Sign up for sports news and features sent to your Inbox

Jon McBride, associate athletic director for communications and media strategy at BYU, told USA TODAY Sports he was referring to alleged use of the n-word when in a statement he responded, “The Guardian’s inquiry is the first time we heard this specific concern. The night of the match, which occurred over a year ago, BYU responded to a concern from a visiting coach about fan reaction when the visiting players knelt during the national anthem.

“A public announcement, similar to one made earlier, reminding fans to be respectful was repeated, and the game proceeded. We are not aware of any additional concerns being brought up during the game or any time thereafter. BYU will not tolerate racism in any form.”

McBride referred questions about confirming the players’ claims to USC. Members of USC’s athletics communication department did not immediately respond to a request for comment from USA TODAY Sports.

Hannah White, a senior forward for USC who was one of the players who kneeled at BYU, said she didn’t hear fans use the n-word but about four of her teammates told her they did. She said players closer to the other end of the starters lineup were those who reported hearing the slur.

“I know it was definitely said,” White told USA TODAY Sports. “I just didn’t hear it. I think when multiple teammates come up and they’re talking about it, I don’t think they would make that up.”

The USC players spoke to the Guardian in part to support Richardson after BYU announced it had completed an investigation into Richardson’s claims and found no evidence to corroborate, according to the person who spoke to USA TODAY Sports.

Isabela Rolley, a junior defender at USC last year, reported the allegation to Keidane McAlpine, then head coach at USC, after the national anthem was played. McAlpine relayed the complaint to BYU head coach Jennifer Lockwood, who informed event staff before an announcement was made over the PA system.

McBride provided video of the BYUtv broadcast of the game and cited the time the coaches discussed the alleged incident and conferred with event staff.

Rolley said she only heard the crowd booing and chanting “Stand up!” But she said about four teammates told her the crowd was using the n-word and she then informed McAlpine.

“He’s like, ‘Do you think people want to cancel the game? And I was like, ‘I don’t think anyone doesn’t want to play this game because it was really big for our (NCAA) tournament hopes.

“He was like, ‘OK, I’m going to speak to their staff and see where we go from there.”’

Gloria Nevarez, commissioner of the West Coast Conference – which BYU – said BYU notified her about the claims in the Guardian story the day before it was published.

“BYU is currently looking into the matter with the same level of diligence as the prior incident,” Nevarez told USA TODAY Sports but did not identify the school involved in the allegations. “We’ve not yet gotten to the point of understanding what next steps should be as information is still coming in.”

The Pac-12, which includes USC, has been made aware of the alleged incident, the conference said in a statement.

“We have been made aware of the alleged incident and look forward to reviewing the findings of the WCC’s investigation of the matter,” the Pac-12 said. “Ensuring a safe and secure environment, free of racism or abuse of any kind for Our student-athletes is of the highest priority for the Pac-12.”