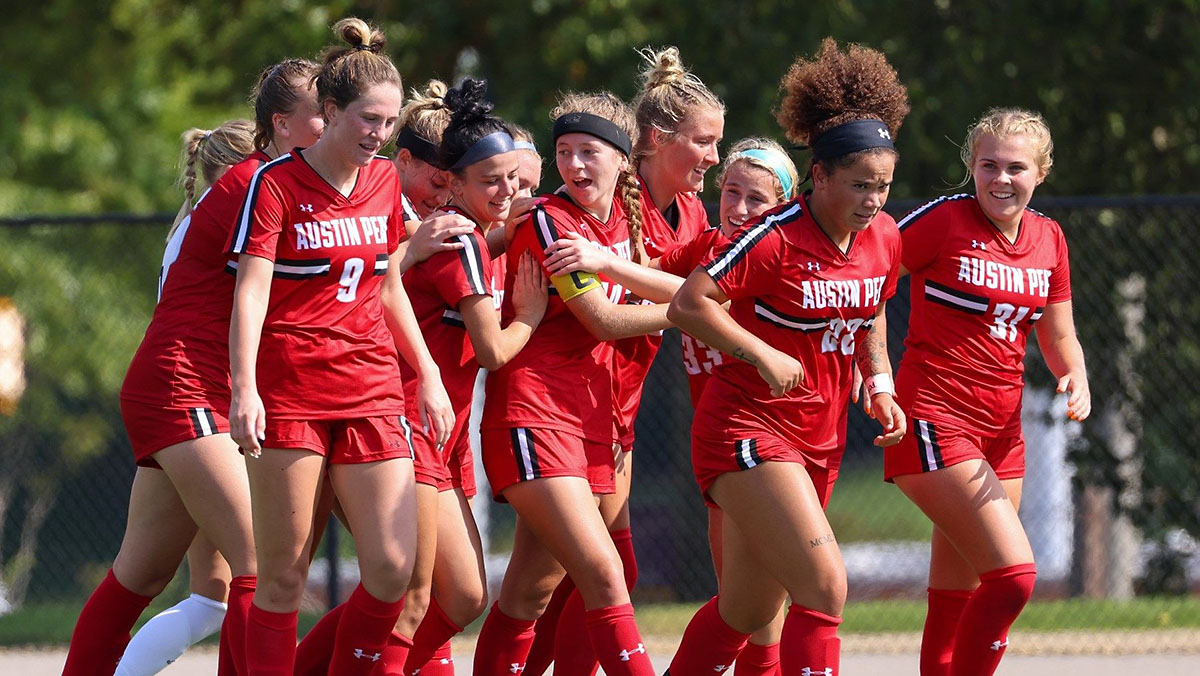 Clarksville, TN – After picking up its first ASUN Conference victory, Austin Peay State University’s soccer team returns to the pitch and kicks off a four-match homestand against Bellarmine in a Thursday 6:00pm match at Morgan Brothers Soccer Field.

Thursday’s contest also is APSU’s annual Go4TheGoal game. The Govs are supporting Go4TheGoal by wearing gold ribbons in their hair to raise awareness for pediatric cancer. Donations to help kids with cancer achieve their goals can be made online at www.go4thegoal.org or at Thursday night’s game.

Austin Peay (3-5-3, 1-2 ASUN) claimed its first-ever ASUN Conference victory in a 3-1 win against North Alabama, Sunday. The season-high three goals were all by different Govs with graduate student Marli Niederhauserjunior Tori Caseand freshman Ellie Drys all finding the back of the net in the win.

The three goalscorers were APSU’s most in a match since a 3-0 victory against Eastern Illinois, October 21st, 2021.

Bellarmine (0-3-7, 0-0-3 ASUN) enters Thursday’s match after drawing in their last four contests. The Knights’ seven draws are the most in Division I this season.

Bellarmine has played behind its defense which has helped the Knights play to five scoreless draws. The Knights have only allowed two-or-more goals once this season – with that match being a 2-1 loss to Wright State to open the season – but enter Thursday’s match against the APSU Govs with just three goals.

About the Bellarmine Knights

2021 Season Result: Despite not earning a spot in the ASUN Women’s Soccer Championship until the final day of the regular season, Bellarmine upset No. 1 Florida Gulf Coast on penalty kicks to advance to the semifinals of the tournament. The Knights’ season came to an end in the following round, however, after suffering a 1-0 loss to No. 3E Kennesaw State.

The Govs’ three goals against the Lions were its most in a match this season and also were the most since a 3-0 victory against Eastern Illinois last October.

The APSU Govs’ 10 shots on goal against UNA were its most this season, while its 13 shots were it’s second-most.

Austin Peay State University is 3-0 when scoring first this season.

The Govs are 1-2-2 on weekday matches this season and are 0-2-1 on Thursday contests.

The Govs have held opponents scoreless in the first half in four of the last five matches.

Seven Govs have found the back of the net for APSU this season, matching its total goalscorers from last season.

McPhie leads the Govs with five points, coming off two goals and one assist.

Baumgardt and fellow sophomore Haley Patterson lead the Govs with 19 shots, while Baumgardt also leads the team with nine shots on goal.

Freshman Ellie Drys tallied her first-career goal against North Alabama over the weekend. Her 64th-minute score proved to be the game-winning shot.

Senior mobile Chloé Dion has had a career year between the pipes for APSU this season. Her four shutouts and 1.09 goals against average both rank third in the ASUN Conference this season.

Dion passed former teammate Peyton Powell (2017-21) for ninth all-time in server victories, while also passing Brooke Abrahams (2004-07) for eighth all-time in career saves with her fourth save against UNA.

Dion corralled her 100th-career save in Sunday’s win against North Alabama, becoming the eighth goalkeeper in program history to accomplish the feat.

Sophomore Lindsey McMahon has started every match of her career at APSU and has a team-best 28-straight starts entering Sunday’s match.

McMahon leads all non-goalkeepers with 976 minutes played. The Fountain Hills, Arizona native has played 90 minutes in nine of APSU’s 11 matches this season.