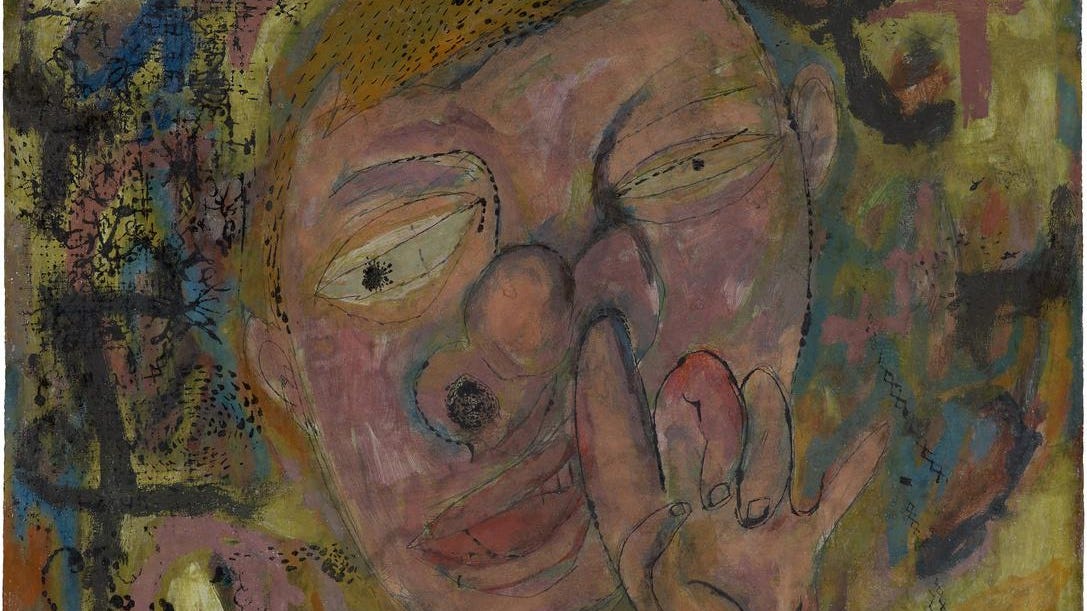 His blonde hair already parted far to the side, a 20-year-old Andy Warhol thrusts a finger up his protuberant nostril, revealing the wrangling of defiance and precarity that imbued his tangled personal life and illustrious career. We encounter his confidence, his nascent inclination for fame, juxtaposed with his vulnerability and rebellious spirit.

The unrivaled 20th century master’s first known self-portrait painting was created in 1948 by the then-20-year-old art student at Carnegie Institute of Technology (now Carnegie Mellon University). His sagacious brilliance is evident in his exploration of the “blotted-line” transferring technique, a version of monotype printing which became Warhol’s precocious aesthetic signature born from a lack of resources for expensive art supplies. The youngest child of a working-class Carpatho-Rusyn immigrant family in Pittsburgh, Andrew Warhola began his artistic journey with cheap drawing paper, which caused the ink to drip and smear randomly. Always the innovator, the young artist subverted his struggles to blaze new artistic paths.

Nosepicker I: Why Pick on Me (The Broad Gave Me My Face But I Can Pick My Own Nose) is expected to fetch between $300,000 and $500,000 when it goes on sale for the first time, alongside a rare depiction of his childhood home. Living Room (1948) is expected to sell for between $250,000 and $450,000. These cherished paintings, owned by the Warhola family, will go on the block November 15 at the November Evening Sale of 20th Century & Contemporary Art at the Phillips flagship in New York, after traveling to Southampton, New York, Los Angeles, London, and Paris for public display.

“I was ecstatic at the prospect because I’ve always thought these works go to the heart and soul of Warhol, and they’re just so rare,” said Robert Manley, Deputy Chairman and Worldwide Co-Head of 20th Century & Contemporary Art at Philips, who worked with the Warhola family on a previous sale at Christie’s.

Warhol’s father, Andrej Warhola, died when the artist was 13 years old, and these early works were held dear by Warhol’s uncle, Pavol Warhola. His father’s death was so traumatic that Warhol “hid under bed upstairs,” James Warhola, Warhol’s nephew, told me on an impassioned phone call last Friday, speaking from the Warhola living room.

“I hate to see them go, it’s kind of a sad event to send them out into the world. But at the same time, it’s a little exciting because they do have a life beyond somewhere,” Warhola said during our nearly 50-minute-long conversation. “Hopefully, some museum will end up with them. But they did hang at the Warhol Museum for at least 10 years. Unfortunately, (the museum) didn’t have an acquisition fund of any sort to work out something with the family. … These are my two favorites, and they’re probably the most important ones because I think they reveal my uncle’s ambitions to be an artist before he went into the commercial world.”

Phillips shares that hope. “We’ve kept (the prices) intentionally low (because) we hope that institutions will be able to bid on these works,” said Manley. “I think they do belong either in a museum or an institutional-type collection. But it’s way too soon to make any prediction about what they’ll sell for. But I think that people will be extremely excited.”

Warhola, an illustrator and artist, said Warhol toyed with the name of the playful portrait.

Ambition fueled Warhol to submit the portrait to the 39th Annual Exhibition of the Associated Artists of Pittsburgh in January 1949, where it was rejected because of its perceived “offensive” subject matter. Tenacity empowered Warhol to resubmit it a few months later to an elite summer group exhibition at the Arts and Crafts Center of Pittsburgh, where its impudence met an audience ready to eschew the normative and embrace the future. In 1962, the Arts and Crafts Center named Warhol its Artist of the Year.

It’s impossible to overstate the historical value of these early works, which demonstrate how superstardom is born from the fringes of humanity through a tireless work ethic and a consummate desire to transcend convention.

“Everybody was talking about this particular painting, the painting of the nose picker,” Warhola recalled. “My uncle had such confidence at that point, which is amazing. I was always impressed with that story of how he enjoyed some publicity, he enjoyed notoriety that resulted from a work of art. I think it kind of sets the stage for what he did later on with the soup cans. I always think that he enjoyed the buzz and the controversy that the painting created.”

Both Nosepicker and Living Room were nearly lost in the late 1970s when they were left in the Warhola family car, which was stolen. The car was recovered with the artworks intact.

The myriad titles and the fascinating histories aptly reflect a multi-faceted artist who continues to captivate, even beguile, the global art world. These intimate early works offer deep insight into the mind and soul of a man firmly rooted in old world traditions even as he cultivated and embodied the ferocity of the brazen New York art world, which climaxed in the 1980s. Art historians and curators scramble to decipher his private life, and these works offer intricate and indispensable details to decode and contextualize. They pulsate with Warhol’s youthful exuberance, drawing us into his inimitable creative process.

Living Room welcomes us into the two-bedroom house at 3252 Dawson Street in Pittsburgh and takes us back to the old country, evoking the familiarity of Eastern European immigrant family life. The rare watercolor painting highlights Warhol’s technical skill and range of styles that would usher in a singular multidisciplinary oeuvre.

“All the other (early) paintings are opaquely painted. I think this is the only one on watercolor board where he used the white of the paper to kind of determine the light and darkness and the kind of voluminous aspect was created through a transparent watercolor,” explained Warhola.

The disarray conveyed through slanted lampshades, doilies shifted from the spots where Warhol’s mother, Julia Warhola, would have meticulously placed them, and the crumpled pillows and rug, captured the room after children boisterously overtook the cozy space, Warhola said fondly. Our gaze circles the canvas, navigating the feelings it evokes, and draws us back to the crucifix on the fireplace mantle which grounds us in Warhol’s lifelong devotion to his ancestral Byzantine rite faith.

I wept when Warhola told me that Warhol’s father was “laid out right in front of this fireplace for three days with a crucifix on the wall,” because my maternal grandmother was waked in an open casket beneath the icon corner in the dining room of the home where she died in 1998. As the first-generation American daughter of a Russian refugee mother and a Carpatho-Rusyn father, I have felt kinship with Warhol since early childhood, rivaled only by my desire to emulate his irreverence.

Warhol was a tremendous influence on Warhola, amplifying his bond with these early works.

“I remember I was there once and he showed me how to stretch a canvas and he always said this is the professional way of doing it, so I’m still doing things the professional way,” Warhola said, brimming with laughter. “He saw me once as a kid, like a six-year-old, doing a painting on a canvas board, and he stopped me and he said ‘let me show you how to do it. Do it on a stretched canvas,’ and he showed me how to stretch your canvas. That’s one of my favorite memories of my uncle when I was trying to be an artist like him back as a six year old.”