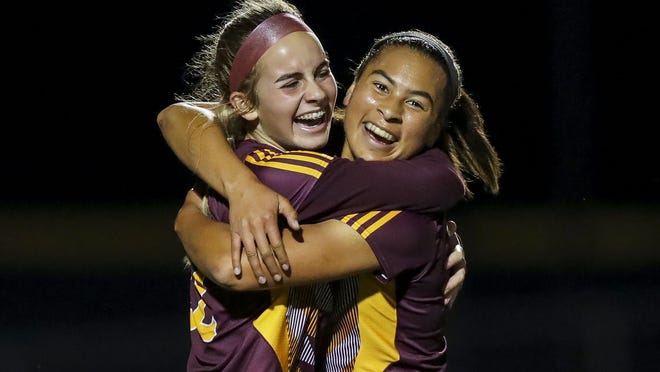 Covington Catholic is 8-10-1 with a brutal schedule that includes losses to some of Kentucky and Cincinnati’s top teams. The Colonels had a losing record last year entering the postseason (6-8-5) before winning eight in a row to reach the state final, where they lost to Dunbar, 2-1.

CovCath is led by Joey Planicka with eight goals. The Colonels are favored to win the 35th District Tournament, and the schedule will get tougher in the Ninth Region Tournament. Cooper (12-1-3), Dixie Heights (13-2-3), Ryle (12-3-2), Highlands (10-4-3) and Newport Central Catholic (13-3-2) have all had outstanding seasons. Cooper, Ryle and Dixie have beaten CovCath this year. CovCath beat Highlands and did not play NewCath.

While not nearly as dominant as they were last season in winning the state championship, which was a very difficult task, the Notre Dame Academy Pandas are still the team to beat in the Ninth Region. But their rivals are closer this season.

The losses have been to two Louisville powers and one of Indiana’s top teams. That includes a 3-0 loss to South Oldham, last year’s state runner-up, which is 15-1 this season. The Pandas also tied reigning 10th Region champion Campbell County, 1-1.

The Pandas have had some key injuries, most notably to senior Abby Unkraut, a University of Georgia commit, who was injured two games into the season. Senior Ellie Greenwell has led the offense with 10 goals and 18 assists, and Riley Robertson has 10 goals. The Pandas have remained solid on defense, allowing only 15 goals all season.

In district play, Notre Dame has beaten Holy Cross 4-0 and Beechwood 4-1 and plays Holmes in the semifinals.

Top elimination games on the slate

The district tournaments allow the champion to add a championship award to their trophy cases. But they can also help give the champion a better matchup in the regional quarterfinals. Both finalists move on to the regional tournament, and some quality teams won’t advance to the regional. Here is a look at some of the top elimination games coming up:

Boys soccer: The 32nd District will have a key grudge match when Walton-Verona (11-6-3) plays Simon Kenton (6-7-4) in Monday night’s semifinals at Grant County. Walton-Verona won 4-3 on Aug. 30. The Bearcats are led by Arif Ceylan, who has a school record 27 goals this season along with eight assists. Dominick Dornbusch leads Simon Kenton with 13 goals. Four of Simon Kenton’s losses are to Ninth Region contenders and the Pioneers recently drew with reigning state runner-up Covington Catholic 1-1.

Adam Morris leads Cooper with 17 goals and nine assists. The Jaguars have allowed only 13 goals all season.

Beechwood and Holy Cross will have a tough match in the 35th District semifinals. Beechwood won 1-0 in Latonia on Sept. 1.

Campbell County (8-8-2) and Scott (7-10-2) will meet in the 37th District semifinals after Scott won 4-3 in overtime Sept. 22. Campbell won last year after Scott won in the regular season.

In the 33rd, Cooper (12-4-1) will face Ryle (4-10-2) Monday at 5:30 pm at Boone County. The teams did not play this season. Ryle was 0-2 in district play this year but it is the battle of Union. Maleah Alexander leads Cooper with 19 goals and 13 assists. Cadence Flamm has 12 goals and four other players have eight or more as the Jaguars lead the Ninth Region with 84 total goals.

‘It lives in my head.’Dixie Heights boys soccer ready for another run at a regional title

Holy Cross is led by Rylee Veneman with 18 goals and nine assists, Ivy Hoffman with 17 goals and 10 assists, and Sydney Quercioli with eight and 10.

Campbell County is aiming for a 10th Region championship for the second-straight year. The Camels are 9-3-7, including 4-0-1 against 10th Region foes. Campbell has a 3-0 win and a 1-1 draw against George Rogers Clark, which is 12-3-2. Campbell also has a 2-1 win over archrival district foe Bishop Brossart (9-7-3).

The Camels are led by senior Ruby Dunlevy, an Eastern Kentucky University commit who was an all-state honoree last season. She has 17 goals and nine assists. Jozie Holmes has 11 goals and six assists. The Camels, with veteran Morgan Rawe as keeper, have allowed only 20 goals.

Bishop Brossart will begin its run at a 10th Region title by playing Calvary Christian in the 37th District semifinals.