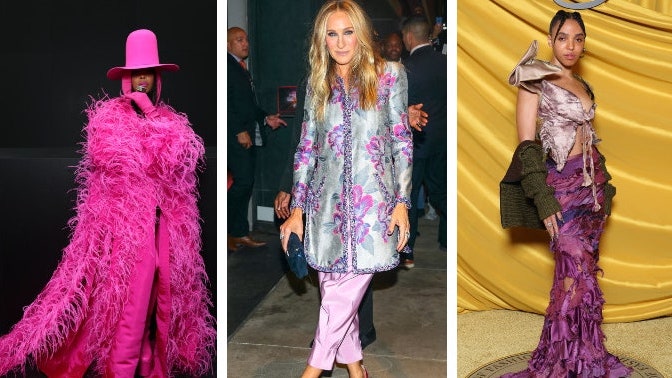 Between Paris Fashion Week and Hollywood’s various movie premieres this week, there was no shortage of red carpet moments to take in. The best dressed stars on the step and repeats embraced the unconventional, choosing to serve up a different kind of glamour with looks that took risks.

The spring shows in Paris demanded strong ensembles from the front row. And there were many! At Balenciaga, Euphoria star Alexa Demie slipped into the label’s glitzy red turtleneck dress; At Loewe, Demie’s co-star Maude Apatow pulled off the label’s kitschy balloon dress, complete with the deflated-balloon heels to match. At Valentino today, Erykah Badu wore the Italian brand’s signature pink hue, but took it even further by rocking a floor-length feathered cape and sky-high hat—her signature piece, of course.

The statement looks were not limited to the City of Light. Back in New York City, Sarah Jessica Parker attended the Hocus Pocus 2 premiere in a look that would make Sex and the City’s Carrie Bradshaw proud: She wore Armani Privé’s couture jacket with pink harem pants. At the Clooney Foundation For Justice Inaugural Albie Awards in the city, Amal Clooney channeled flapper girl style in a totally-beaded, golden Atelier Versace gown.

Which were your favorite celebrity looks this week? Be sure to vote below, and check back on Friday to see which ensemble is the ultimate best dressed of the week.